Beginning to write a new book is always a fun project, but then to me the process is ongoing. As I writer, I have discovered that you never know when you will get a new idea for a story, and it's important to keep your mind open at all times.  Some of my story ideas began back in my childhood, from just a line I got from my mother when she told us about the first time she met my father.
She was very young, but she always said that she knew she would marry him some day and she told her cousins that. I used her exact line in my romance, Home Fires Burning.   "I'm going to marry that boy some day." 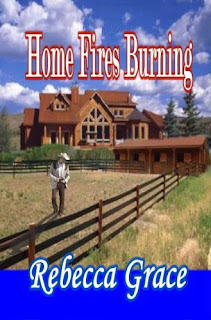 That always stayed with me and I found that as I began writing, just paying attention to events, comments and locations were all learning opportunities and could someday be used in books. My life was one big research project for writing fiction.

When I was working as a journalist in TV and as a public relations writer, my assignments often began the same way – with research. Whether it was reading over newspaper articles or viewing past stories on a subject, I always knew that when you set out to write about a subject you needed to gather as much information as possible. And if you were writing about a person, you needed to know as much as possible about that person.


That didn’t change when I began writing fiction. The subject matter was important, but even more critical was getting to know the characters involved. If I was going to make those fictional characters move or react in the way I wanted I needed to know everything possible about them. I always say in my classes that it is easier to writer about your mother or husband than it is to write about a total stranger. You know how they might react to a situation or a setting while you would have no idea how a stranger might react. That is why I always recommend getting to know characters first, as soon as writers begin plotting their novels. The best story in the world will seem flat if the characters are flat.

And what is the best way to get to know someone? Talking to the person, of course. We’ve all heard of the benefits of interviewing our characters. We’ve even received question lists and formulas that can help us. But too often these questions don’t go far enough. We need to dig deeper. I always recommend, not just questioning someone, but spending time with that person.  If I can’t afford to spend a few hours a day hanging out with that person, how am I going to make it through the necessary weeks I will spend with that character as I get their story down on paper?

But how does that interview process work? If you’ve never done an interview, (even of your characters) how can you go about it? I actually still employ some of the processes I used when I was actively interviewing people as a journalist – whether it was over a new building project or a down home story about life on the farm. There were some things I learned to do on an interview BESIDES just asking questions. The key was to not only listen but to observe.

Here are some things you can consider as you do your character interview:

Where are you doing it? And how makes that decision – you or the character. Well, it is all up to you, but think about it. If your character is a business woman, perhaps you want to do it in her office. If she is a stay at home mom, you might choose her house or you might do it in a park as she watches the kids.

If you are doing it at the person’s house, then by all means, be nosy and curious. Now I am not saying I used to look in people’s bathroom cabinets when I did interview in homes, but as a writer you can. Think about the setting where this person lives. Is it an elegant home with everything in a perfect place? Does it look like the living room was professionally decorated? That will tell you something about this person – and it’s something YOU might be able to use in your story. Something you might not have considered otherwise. How will others see your character? Like you are him or her now? The same is true of the person’s office. Is it neat and tidy or are there personal objects all around like a bat and ball in the corner or pictures of your interview subject on the ski slopes? Is it in a tenth floor corner office with a stunning view or a cramped cubbyhole in a trailer on a construction lot? See it in your mind so that you can describe it later in your book.

If you are doing your interview in a coffee shop, is your character easily distracted by others? Does he or she nod to people or does she totally tune out the chaos around her. If you are having lunch with your character what does she order and does she cut her meat into little piece before she eats it? Okay, these may seem like extreme things to be paying attention to, but these are some of the little things you can keep in your head as you write. How would your character react if she is meeting a stranger in a coffee shop – someone she needs to get information from to solve the mystery or if she is meeting the hero for a coffee date.

Think about how your character might sound on the phone. Does being on the phone make her nervous and it is obvious she wants to get off and be finished with you? Think about who that person at the other end of the phone might be. How does their voice sound? Certain or hesitant?

Again, these are all little things, but as a journalist I was always observing and paying

attention to every detail possible. I still do that as a writer. We all need to pay attention to details because they can make a difference in how you write that character in your story. Those little details set us all apart, not just as writers, but as people, so including those small details make a difference.


What about the questions for the interview? That is another area where it helps to pay close attention. I always came into an interview with a list of at least 5 to 7 questions.  But once the person began to speak, I not only took notes on what they were saying, I was writing down additional questions or posing them in my head to ask later. As you interview your characters, you should keep that in mind too. That’s why I mention that we all can get a list of overall questions to ask our characters from writing classes.


But… as you ask those questions and write down the answers, consider going off script. Think of other questions that might pertain ONLY to this character, something that might not be on that prescribed list. Look for the unusual, the unique and the quirky. Those can be some of the best answers and can make your characters stand out.


And mainly, listen to those answers. Write them down and when you are stuck at a place in your book where you don’t know what might happen next, it can pay to go back and look at your interview. You might find some answers there.

Posted by Rebecca Grace at 9:34 AM