Thrills & Chills from Down Under

Don't we all love it when we can get into not only one book by a writer, but then a second and a third?  Writing one book is difficult enough, but trying to write three seems like a daunting task. I am currently doing that, which is only part of why I was so interested in the work of Stephen King, a West Australian author who writes thrillers. As a big fan of reading thrillers, I was intrigued with his latest work. Even better, he has written a trilogy, Glimpse, so naturally, I needed to know more and wanted to get the answers from Stephen himself. 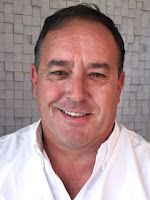 How did you get the idea for The Biblical Killer?

It was a process; unlike any I’ve had before with the ten books I’ve published. As this book is the third installment of the trilogy, I already had in mind the direction my main characters were going in emotionally, and I knew the killer from book 1 would escape from custody to seek his revenge on them. But I had to find an intriguing killer to take center stage, and that was not so easy to do. The use of the word Glimpse in each book title signifies that I’m going to take readers into the mind of each murderer and show why and how they became what they are from their own point of view. Book 1’s murderer was a sociopathic narcissist; book 2’s was addicted to beauty because his life from birth was the polar opposite. In each case building the character of the killer was as important for me as the protagonists. I didn’t want to write a trope, I wanted the reader to get engrossed in his tale, as much as the hero’s (hopefully I succeeded). One day, I happened to overhear in a conversation two words: Situational Schizophrenic and it was like a Bass rising for a lure. A ‘situation’ that caused a severe case of mental illness? I had to learn more.


A good friend of mine is a psychologist and we had a long conversation. My daughter also has a degree in criminal psychology, and the more I learnt about schizophrenia, the more the killer emerged from the mist for me. And so, Bobby Cornhill and his sister Martine grew wings. I saw two children on a remote farm who only have each other to play with until a schizophrenic uncle came to stay. This was important, because sadly, most often the complaint is hereditary. When they become adults, Martine dies and Bobby blames himself for not saving her as he used to when they played on the swing, under the Jacaranda tree. Guilt is one of the most severe triggers to mental illness, and Bobby has it in spades. So much so, his schizophrenic alter ego, named Jolly, wants him to kill anyone who tells lies to have sex with married people on an internet dating site. The question the reader has to decide is: is Jolly merely a figment of Bobby’s guilt-ridden psychosis, or is he in fact real?

Tell us a little about the background for Patricia Holmes and how you came up with her.

I suppose, if I’m honest, Patricia, ‘call me Pat everyone does,’ Holmes is my favorite character of all. You could say she is my ideal woman; highly intelligent, insightful, humorous and devastatingly attractive, not to mention independently wealthy. I love writing her part. I wanted to set the books in an era when women had it tough in the police force, and criminal psychologists were often seen by the police as the enemy. Pat has to be strong and is paired with a twenty-year veteran cop who thinks she will be a complete waste of his time in tracking down a horrific serial killer. But then, he meets her, and they are instantly attracted to each other. I thought the mix of the era, her passion and ability of understanding the criminal mind, along with the inappropriate desire they both feel being in dysfunctional marriages, was irresistible. I love writing about ordinary people and putting them in extraordinary situations.

I love that she can look at random things and make sense of them and understand the psychology behind it all. Cops look at a crime scene and look for clues and evidence, Pat looks at it and asks why. When she explains her profile, and reading of clues, the male police officers she works with are amazed at her ability to understand the one thing they can’t; why did the murderer do what they did.

What about Sargent Rick McCoy? Where did you get the idea for him?

Rick is a good guy, but like most of mere mortals, he is flawed. He is an honest but jaded veteran cop who has seen it all and he is slowly becoming disenchanted with the senselessness of it all. His marriage is a problem, though he loves his wife and daughter. In book 1 he eats and drinks to much, won’t talk about his issues with his wife and sees her trying to help him as nagging. He has an affair in a moment of madness and tries desperately to make it up to his wife after she gives him a second chance. But then Pat walks into his life when a body is found dissected in a suitcase left at a rubbish dump. Across the trilogy the reader will see the effect on four people of their inappropriate desire as they work together to find three serial killers.

How do you normally come up with story ideas?

Often it’s a random thought that enters my head, and I have no idea where they come from. For me to explore an idea I have to write from that point forward and see where it leads me. Often I amaze myself. I don’t preplan anything; I let the story dictate where it wants to go, then fix all the errors in rewrites when I’m finished. Often when I find out how it ends I need to go back and find a new beginning. I know some authors would be horrified with that style, but for me, once I start the words flow like a tap. This is especially true of the ending. When I’m writing, I don’t know how the story will finish and I deliberately force myself not to think of it. What I find is, I want to know what’s happening next, and the only way to find out is to write it.

What are you working on now?

I’m in the re-write stages of a book called Winer at the Light, a romantic thriller set in 1952 on a remote island lighthouse when a young woman discovers on a lighthouse, there is nowhere to hide. She has rescued a man during a major storm who has lost his memory, but then two men turn up to hunt him.


Also, due to requests from my editor and narrator, there will be a Glimpse 4, called Glimpse, The Angel Shot. Yep, it’s the first time a trilogy will be made up of four books. They, and other beta readers of Book 3, tell me they all want to know what happens next, and I am deeply flattered by their demands, so I’m 30000 words in. Rick and Pat’s story continues after the devastating ending in book 3.

What are the other books in the trilogy?  Can you tell us about them?

Probably the best way to do that is give you the official blurbs.

In 1999 Australia, Sergeant Rick McCoy investigates the murder of a woman found packed inside a suitcase.

The Killer abducts another victim and threatens to dismember her slowly. His life is further complicated by a marriage in tatters. Frustrated at every turn, he is paired with glamorous Criminal Psychologist and profiler, Patricia Holmes.

While trying to rebuild his marriage, he finds himself in a desperate race against time to free the victim and fight his desire for his new partner.

Rick McCoy of the Major Crime Squad is trying to repair his marriage when he is sent to the South of Western Australia. A young girl's body has been found in a cave, with flowers on her chest. A search finds five more bodies.

Beautiful criminal psychologist, Patricia Holmes, has recovered from her stab wounds inflicted by the serial killer PPP, and is brought in. Pat believes they are hunting a man who is addicted to beauty. When another schoolgirl goes missing, they have only days before she too will die.

As their desire for each other grows and the pressure on their marriages increase, they close in on the man responsible for the beautiful deaths. Meanwhile, in the high-security wing of the mental health hospital, PPP plans his revenge on Rick.

Criminal psychologist Patricia Holmes is now a detective paired with Detective Sergeant Rick McCoy. Together they hunt The Biblical Killer, so named for the quotes left on walls written in the victim's blood. To lure the murderer out they join the Tender Nights internet dating site, openly making themselves targets. Rick and Pat have fought their desire for each other for months. Can they now survive their lust and an insane murderer intent on vengeance?

I’d like to thank you for having me, and for asking such great questions.

Thank you, Stephen, for telling us about your books.  I think I'm hooked.   Here is the contact info for Stephen:

Any comments or questions for Stephen?