For the past six years November has been a very busy month for me because I've tackled NaNoWriMo -- National Novel Writing month. It is a time when thousands of other writers also tackle the prospect of writing a book during the month of November. Local groups sponsor write-ins and we all post our daily word count to the website every day. We sit in a coffee shop or at times there have been groups who get together in conference rooms during their lunch hour to work on their stories. 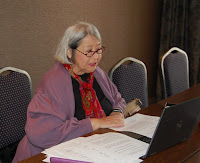 What I've found about NaNoWriMo is that it has been a great way to get new work started. If there is a project I've wanted to get going on, NaNo is a good place to begin. The words begin to pile up and by the end of the month, even if I haven't made my 50-thoussand words I've gotten a good start and I can continue even after the month ends. There have also been Camp NaNo projects in July and during other months of the year.  Why do NaNoWriMo or a writing related project like this?

1. It's a good way to focus on ONE story. This month I have chosen to begin a book I've been planning to write. Don't we all get into that habit of saying, "I want to write this book," but then we don't do it? NaNo gets me focused with that project so I have to construct at least a basic idea to get started.

2. It establishes or re-establishes a daily writing routine.  Too often we find many reasons or excuses NOT to write. With a NaNo word count staring me down every day, I know I need to start writing at a certain time and keep at it until I reach my daily goal or I may fall off and have to make up time later. Keeping that daily routine works and it has carried over many times for several months -- long enough to get this book either close to finished or finished and ready to work on a new project.

3. There are others who are going through the same process. Again, in a big city it's easy to find other

nano groups that are doing write ins and sitting in a coffee shop or library where we are all trying to achieve the same goal is invigorating. It's nice to know we are all having to struggle. And at times we wit and have coffee after our writing time and talk about our work. That can be helpful too by sharing plotting woes and getting character ideas. It's an opportunity to socialize with other writers that might not normally be there. I did my first NaNoWriMo when I was tackling my sweet romance, Home Fires Burning, and the suggestions some writers gave me ended up in the plot for the book.

4. There is encouragement from the group. Just like sharing with others, I get to hear how others are suffering and can add encouragement to them for their writing. They do the same with me, and their problems always sound a lot worse than my simple statement that today I don't feel like writing. They might have children or families interrupting them. I simply have two rambunctious kittens begging for attention that disrupts my writing progress this year. But even their antics get me back to writing.

5. All those words will be written. No matter how you look at it, participating in NaNoWriMo gets a lot more done than I probably would have in other times. Then too often I'll stop and start over because something doesn't sound just right. Working to get a word count done means I have to keep going and know I'll have to come back later. I don't stop and take the time now. My goal is to get that word count up so I have to move along rather than spend an hour contemplating one minor plot point.

Good luck to all the other NaNoWriMo writers out there. Hopefully we will get through our projects and next year we can be starting on something new!
Posted by Rebecca Grace at 12:00 PM