This is the time of year when I usually take stock of things I did and didn't get done in the past year in preparation for making up a list of things I want to do in the New Year. (I don't usually check on last year's list--in case I didn't get everything done.


Usually I do this in terms of my writing and whether or not I got a book done or something published. Unfortunately I came up empty on the fiction front this year, but I did manage to get two non-fiction booklets published with my co-author Sue Viders. (see Let's Write a Story blog). Editing on the third book in the series should be done in the next week.


And while I did a lot of writing I am sad I didn't totally finish anything, but I have several stories on the verge of having The End written.


So what are my accomplishments? Well, one of the things I like to note in my writing classes on setting is to set the mood, know the location. One of the ways I do that is first hand observation. 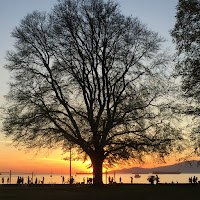 This year I spent a lot of time first-hand observing in a series of trips that often were totally unexpected. They were not only fun but continue to give me pleasure as I get to write about them.

The spring took me to Washington state and Vancouver, BC, which I hadn't visited in several years. Driving north of Seattle took me back to the fictitious location of Redfern Manor, and brought me new ideas for a story set in the Northwest. A spectacular sunset on a Vancouver beach provided all the inspiration I needed. While my sister took pictures, I was coming up with story ideas and new possibilities for a sequel.

A summer trip to southern Colorado took me back to my roots and an early morning visit to Trinidad, Co,  where I am setting a western historical romance. You can totally plot a story while traveling across 100 miles of empty prairie and being part of the location can really pull you into thoughts of the past and wagons struggling to roll across the land. 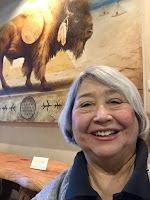 My final trip of the year took me to New Mexico, where my Dead Man series is set and just driving across the country there also gave me new ideas for the final book, which I am just in the process of finishing.  Again, there is a certain feel for the landscape and talking to and listening to the people of the region that you often only get through real interaction. I spent quite a bit of time simply wandering around and soaking in the flavor of the city, and doing some writing of a scene set in Santa Fe.


As it turned out, I guess when I look back I did accomplish a lot of things in the past year. Between research and editing I have several stories that are almost ready for an editor.