A World of Mystery from Down Under

As a longtime mystery reader, I am always looking for new and different authors in that field. Then I heard about Stephen B. King.  No, not that other Stephen King, but west Australian author Stephen B. King, who writes wonderful mystery novels filled with enough suspense to keep you looking over your shoulder. His latest, due to be released soon is Glimpse, a Beautiful Death, the second book in his Glimpse Series. I got an opportunity to ask him about his writing. 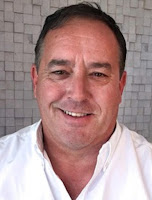 Have you always wanted to write fiction?
All my life I wanted to write, and tell stories, but for most of it I made excuses not to do so, which makes me a late bloomer. I was, in my wild days, a rock guitarist, poet, songwriter, living the dream of sex, drugs and rock and roll, and gave it all up for love. Then I was busy raising children, renovating houses and working sixty plus hours a week. I will always be grateful to my wife for buying me a laptop and telling me “no more excuses go and write that damn book,” when I pestered her once too often about an idea I had for a story. That was inspiration from a song by Leonard Cohen, Nevermind, which became my first book, Forever Night.

Sometimes, I think she regrets that now as book number ten is contracted and eleven is 15000 words in.

Time. One of my characters in a time travel/romance/thriller I wrote called Thirty-Three Days says at one point: “Tine, yes, if only there was more time.” Whilst Jenny said that in a different context the line echoes my life in writing. I manage a Kia dealership for sixty hours a week plus travel to and from time. I have a family, and my wife and I love to renovate. So, I never have enough time to write as I’d like to.

Promotion. Because of the point above, finding time to promote myself and my book(s) is very challenging. I love doing it, but not as much as I love writing – so something has to give.

Tell us about your road to publication – how did it happen?

I was very lucky, and very unlucky. That book I mentioned, Forever Night, was accepted by the first publisher I approached with it. So it was lucky in that sense. I got to work with some brilliant editors in bringing it, and other projects I was working on, to life, and learnt a great deal about how to tell a story. But the unlucky part was that they got bought out before Forever Night was published by one of the big houses, and they in their wisdom shut down the line I was contracted to: Evidence Press.

That’s was the start of a nightmare time for me as I found myself in limbo. Because it got so messy I had little choice but to self publish the next four books which was how long it took to work it all out. Once it was, I came to The Wild Rose Press, and it’s been a delightful experience ever since.

You’re writing in different genres, including time travel and mystery.  How did you decide to do that and how does that work for you as a writer?

This is a fantastic question, and it deserves a good answer. When I was at school, and at times ever since, the thing I’ve enjoyed most, was writing to a challenge. For example a teacher would say write two thousand words starting with: ….., When I was in rock bands I wrote a lot of songs, some to a deadline for other people to sing – which was fun. I’ve won three short story competition, for example one where the subject had to be about a note found on the ground. Another time a publisher asked me to contribute a story to an anthology in a genre I’d never written in before, and the story was very well received.

What I’m trying to say is just because the majority of my books are in the Serial Killer/crime/police procedural/thriller mold, it doesn’t mean I have to be there  – its just where I love to be at that time.

Thirty Three Days, and Repo are books that do not fit into that category, and one I’m working on now, called Winter at the Light, is a romantic thriller about a young woman living on a remote island lighthouse when her father breaks a leg, which is set in 1952.

For me it’s all about inspiration, and when I get an idea, the only way I can explore it to write from that point forward. I’m not criticizing authors who stick to one genre; we can all beat to the sound of different drums. The other Stephen King got so typecast that his publisher would take nothing that wasn’t in his genre so he wrote under Richard Bachman, and lots of other writers are the same. I don’t want to limit myself but be free to write what excites me, and I think if I’m excited, hopefully that transfers onto the reader.

You’re also writing several different series. How do you keep everything in order?

I’ve written two trilogies, and continuity is challenging. In my case, the reason I wrote them was because I wanted to tell a story about the central characters, and knew I need more than one book to do so. Three Deadly Glimpses is a case in point, it’s about the attraction between two married people across three murder investigations, that they are thrust together to work on. It also explores the effect on their marriages if, and when they act on the desires they harbor.
When I’m writing I keep a notebook by my side and write down things like: the timeline for events, and also peoples names (it’s really frustrating three chapters later when a previous character comes back and I can’t remember their name).

When Book 3 was completed (Glimpse, The Tender Killer) I did five re-writes and read-throughs, trying to make sure I hadn’t done something in the wrong order – it was very taxing. When an author gets a trilogy right it can be an amazing journey because he, or she, has the time to really develop the characters and the situations they are placed in. Have I done a good job? Boy, I hope so.

Tell us about your upcoming release and what made you want to write it?

I have two releases in Early April, and I am really thrilled about them. Firstly Book 1 of the trilogy (already published) Glimpse, Memoir of a Serial Killer will be released on audio. The narrator has done a breathtaking job, bringing just about the most evil man imaginable to life. He emailed me several times during production, because he was so taken with the book, he wanted to get the characters just right. It was very humbling, and he’s done an incredible job. While not a story for the fainthearted, it is a powerful story of a serial killer’s journey, from his perspective We also get to meet the two people who have to work together to catch him, and the instant attraction they feel for each other.

The second release is the print and E Book for Book 2 of the trilogy, Glimpse, The Beautiful Deaths and will be released worldwide on April the 10th.

As to why did I want to write it? It was the juxtaposition of two ideas I had at the same time, firstly a child, witnessing someone bleed out, and the effect it had on him, and secondly two married people working together who fancy the hell out of each other, but, they are married and come from different walks of life. In my life, some of my best friends have been women, some of who I’ve worked with, and I have felt that attraction. For me I love being attracted to a woman, flirting, and having fun, without actually taking that irrevocable step of doing something about it. I wanted to write about that, and the Glimpse series allowed me to do it.

What are you working on right now?

One day, I was driving along, and an idea snuck into my head (this happens to me frequently) the idea was: The Lighthouse Keeper’s Daughter. Now I wasn’t thinking what to write next, I wasn’t thinking of lighthouses, it was just a random thought. So my next thought was: what about her? I then imagined her being alone on a remote island, her father gone to hospital and she is the temporary keeper of the light so he doesn’t lose his job. Then I thought, how can she fall in love on a lighthouse? Because a man washes ashore in a lifeboat, with a total memory loss, I answered………………

I’m now 15000 words in, it’s set in 1952 which was the era that lighthouses began to lose keepers to automation, so for me it’s romantic. This book becomes a thriller when two men turn up looking for the other man, and on a lighthouse, there is nowhere to hide.
Not a serial killer in sight!

Thank you, Stephen, for being my guest.

I’d like to offer my sincerest thanks to Rebecca for hosting me, and asking such great questions. I’m always available by email, Facebook or Twitter, and I always respond. So if anyone has any other questions, fire away.