Let’s face it – as writers we all have our particular favorites – whether it is the subject or genre we are writing or the books we are reading.  We know what we like so we keep returning to the same things over and over. 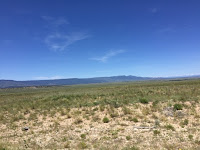 different route or try visiting a new place where you have never been before.

That’s how I ended up on a dirt road in the middle of a cow pasture on a sunny summer afternoon. Nothing around me but the cows…. Oh, and hundreds of campers getting ready to spend a few days listening to music, studying nature and relaxing.   I was actually delivering my niece to her mother, but it was a spectacle I never expected to be part of when I set out. We were going to take her to a certain exit off the highway and her mother would meet us there.

That didn’t happen and we had to travel several miles over gravel roads just to get to the pasture where we had to drive on over open land toward a community of tents with plenty of dust rising in the distance.  This wasn’t something I would have chosen to do, but my niece was counting on me so off we went, bumping over the open range of grass clumps and trying to dodge the occasional cactus patch.  I could see campers up ahead, setting up their own plumes of dust so we knew were headed in the right direction.

We made delivery, after meeting interesting campers along the way. Some had come from Kansas, some from Iowa, some even from Nebraska just for the privilege of camping out in this pasture and commune with nature.

Needless to say I  was out of my comfort zone.  But as I sat and talked with all of them and listened to their stories (which I will tell at another time) I realized we all get too used to sitting in our little offices as writers, working with words instead of people. Libraries can be like second homes to me, and I’ve never found one I didn’t like. There’s something calming about all those books around and I always find it easy to sit down and write.

Coffee shops are familiar places for me to visit. No matter where I go in my city, I know I can find that familiar Starbuck’s logo and I know what I will order and I can sit at a table that is as familiar as one 40 mile away. I’m comfortable there.

But sometimes we need to go to other places and we need to visit other places. Sitting for a while with some of the campers in that grassy cow pasture, I realized I might have driven out of my comfort zone, and maybe I need to  do that with my writing too.  I might normally write romance, or suspense, but wouldn’t it be fun to try writing a fantasy world set out in a desert like that cow pasture where everyone was talking a different language. Or perhaps set it on a different planet or in a different time era.   I got to thinking about the stories that could be written about the covered wagons that once crossed these plains carrying the pioneers who would later settle the land and raise their cattle and sheep.  Some would try to farm the land.

No matter who, the stories would be fascinating, and after sitting there for a while I started to get inspired by the idea of writing a western instead of just my city romances and mystery novels. Why not try a new genre?  Or for that matter, return to an old genre. I've written romances set in just such a lonely area and it took me back to when I was writing that book. I'm also working on a new story now, set in just such a location.

Sometimes we need to drive into a foreign place or even back into the past and make ourselves uncomfortable in order to get new ideas.

Yes, I was pleased when I got away from the pasture and that my car didn’t have four flat tires and just needed a wash, but I had several new new ideas for stories and I also took away a valuable lesson as a writer.  Straying out of our comfort zones can expand not only our horizons but stimulate our imagination and help to come up with new story ideas.  And that is what is really important... not whether I get dust all over my car.