A Lesson from The Past

Do you have old stories just waiting to be told?  Those wonderful characters you designed on neat pages of character forms, or those great plots on note cards that are all sitting inside your desk drawer?

Or what about old story ideas? As writers, aren't we getting them all the time? What do you do with them? I have a whole file.  Back when I worked in a newsroom I was always running across crazy stories... either in a newspaper or on the old Associated Press or UPI wire machines and I made a practice of keeping a file in my desk drawer just for them.  Why?  Not because we were ever going to do a news story on them -- some of them were international, but just to be able to re-read them and laugh again at the human condition or think about what kind of a fiction story might result from an incident.

Let's face it: We all love unique and great stories -- old and new -- not only non fiction, but the fictional stories we start writing and never finish. Sometimes it's enjoyable to get out those old works and re-read them. If nothing else, they can show you how far you've come! Recently when we were cleaning up the basement I ran across one of the first old manuscripts I began writing some 40 years ago while I was still in college.

The typing paper is yellowing, and there are plenty of typos because I  didn't even have white out back then.

What do you do with an old manuscript?  Don’t we all have them?  Some, we started years ago and just lost interest. Or maybe the story was going no where or we weren’t connecting with the characters. Whatever the reason, we just gave up on the story and let it go. 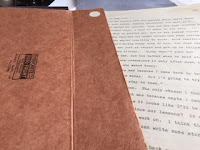 But there it was – still in its own individual folder, the pages yellowed with age, the print from an old Smith Corona typewriter I got in college.


What to do with it? I knew immediately I couldn't throw it away.  Who knew what might be in those pages? Maybe there were pearls of wisdom I wrote back then.

The funny thing about the story is that while it was never published it did set the stage for my book Dead Man’s Rules.  This was the original story behind it. My first temptation was to go through and put this one into the computer and see if I could get it published as sort of a prequel.


But then I began to go through it.  What I really discovered was just how much I had developed

as a fiction writer. Okay, so yes there were the obvious typos that couldn’t be fixed with a couple of key strokes back then. Instead of clean copy that gets printed now, I had lots of pages with xxxx on them.


But the story itself wasn’t bad. At least the plot wasn’t. I found myself caught up in the problem of a woman who discovered she had married the wrong man. Actually as I read through it, I found myself surprised at the story, but also cringing at the mistakes and problem areas – things like She smiled followed four lines later by He smiled. Such smily people!

Then, of course, there were the obvious punctuation mistakes and all those little things that I was to learn later in writing and editing classes.

What I came away with from this experience is that we can develop our voice and make it clearer and better and we can become better at dealing with the editing and the word choices.  The need to write, though, stays and we shouldn’t ignore it.  We should be ready to pick up that pen and paper or sit down at the keyboard and write when we get the urge.


And we also need to keep learning.  There were so many lessons that followed those early pages that I have taken to heart and so much of what I see in those pages as compared to my current pages only illustrates that.  If you want to be a writer, go for it! Just like any other choice, make the one that works for you, and if you want to write, do it!  The mechanics can be learned. The writer’s touch doesn’t go away.  The need to write only becomes more urgent.


I’m not certain what I’m going to do with this old story. What I also discovered when going through it is that the first 60 pages from it are missing. Who knows where they went!

I do know I’m going to re-read it all though again – not just to see how far I’ve come, but because I might it will give me more ideas for the future. And not only that... but I kind of enjoyed that story. I do remember that.