In this magical holiday season, it is always fun to find a writer who brings us a magical type of story that can transport us to a new world. My guest today in My Writing Corner is Helen C. Johannes. She  writes award-winning fantasy romance that is inspired by the fairy tales she grew up reading as well as the amazing historical places that she has visited in England, Ireland, Scotland and Germany.

Her stories are  tales of adventure and romance in fully realized worlds that spring from pure imagination and show her lifelong interest in history, culture, and literature.  If you're looking for warriors on horseback or strong-hearted  women who refuse to sit idly at home, as well as passion that cannot be denied or outrun—that’s what she says readers will find in her books.  Her latest took is Lord of Druemarwin. 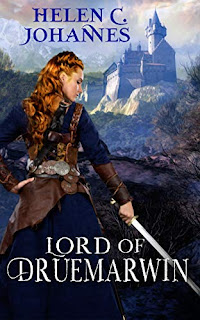 Lady Raell can fight, ride, and argue politics as well as her brothers. Only being mistress of her father's household keeps her in skirts. In Naed, the new Lord of Druemarwin, she has found devotion, a kindred spirit, and a marriage promise. But when a forgotten and unwanted betrothal comes to light, she has no choice but to run.

Amidst sweeping revolution, Naed must rally his people, fend off assassination attempts, and fight against claims he's a traitor. Then he discovers everything about his lineage and family is a lie. And his beloved belongs to another.

With lives and a kingdom at stake, Raell and Naed must find a way to protect the innocent and save their love. In a world of lies and betrayal, can they trust each other?

“Raell, now is not the time—”
Aye, it wasn’t. They stood in torchlight on an open parapet while assassins stalked them, but this might be her only chance to reach him across that precipice he’d thrown up between them, to secure the future they were meant to share.
“Does my honor mean naught? When weighed with D’nalian honor, is mine lesser because ‘tis a woman’s honor? Or because ‘tis a Tolemak’s honor? Be honest and tell me that.”
The world had gone silent; Raell could hear nothing over the rush of blood in her ears, the terrible heavy beats of her heart while she waited, dizzy with fear, breathless with longing, for the man she loved to respond with a word, a look, even a blink. Even a shift of his gaze she’d take as a sign he’d at least heard, mayhap begun to consider—
“Yes, be honest, Lord Naed,” said a voice she’d heard but once, a voice that raised all the fine hairs on her body and made her innards contract into a cold, tight knot. “Tell us both how much honor means to a bastard who’s betrayed his countrymen and his blood.”
Don't you want to read on?  I do!  Here are the buy links:

And if you would like to read more about Helen or to get in touch with her, here are the links:

Blog: https://helencjohannes.blogspot.com/
Author Central: https://www.amazon.com/Helen-C-Johannes/e/B003JJDQWS/ref=dp_byline_cont_book_1
Goodreads: https://www.goodreads.com/author/show/4031965.Helen_C_Johannes
Bookbub: https://www.bookbub.com/authors/helen-c-johannes
Contact email: helen.c.johannes@gmail.com
Thank you, Helen for being my guest today and taking us to another world! Any comments or questions?