Reading a great suspense story filled with action and romance has always been high on my list of great ways to spend some time. Today in My Writing Corner, I'm pleased to introduce the latest romantic adventure from author Peggy Jaegar. Her newest book is A Pride of Brothers: Rick and like her other stories it promises to give the reader action and adventure mixed with a great love story. 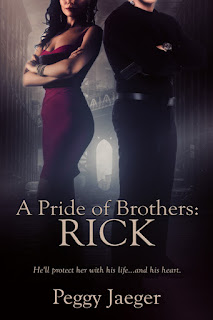 Rick Bannerman's job is to protect. An elite bodyguard and PI , he's used to denying his emotions and ignoring his feelings in order to jeep those in his care safe at all costs. When lawyer Abigail Laine becomes the target of a vengeful client, Rick slips into protection mode even though Abby refuses his help.

Four Years ago Rick Left Abby standing on a balcony alone, after walking away from a kiss that sent them both reeling. His refusal stung and Abby's sworn to forget it and him so she can shield her heart and move on with her life. But now she needs Rick's professional help and her reluctance to accept it could just cost her life.

Can these 2 stubborn and independent people put their troubled pasts behind them and learn to trust one another?

Sounds like a wonderful story, right? I wanted to know more, so of course I asked to interview the characters. Here's what they had to tell us about each other and their predicament:

Rick, tell us about your life right now. What makes you happy?
In all honesty, I’m at my happiest kicking back and relaxing on the couch, a bowl of chips in one hand, my girl in my other and a sci-fi classic playing on the movie channel.

What is important in your life?
Truthfully, the most important thing for me is that I never turn out like my old man. He’s currently serving life in prison for the murder of my mother, but before that he was a drunken abuser who beat the both o f us on a regular basis. I am terrified of ever losing control of myself and my temper so I don’t drink alcohol and I’ve never committed to a relationship. Relationships terrify me.

What your memory of Abigail Lane?

Well, we first met at my best friend Josh and Abby’s sister Kandy’s engagement party and when Abby walked into the room my legs got wobbly. All that gorgeous long, midnight back hair was falling down and tickling her waist and her beautiful blue eyes were laughing. When we were introduced and shook hands, I swear my arm felt a shock all the way up to my shoulder. This was one gorgeous woman and I wanted to get to know her better and hopefully talk her into bed.

How did she originally come into your life and leave it?

Well, she’s not gonna leave it. Not if I have anything to say about it.

What worries you about her now?

After everything that I happened with her crazy stalker I was concerned she might have lost some of her sass and fearlessness. I didn’t have to worry, though, ‘cuz it only served to make her stronger and more committed to helping disenfranchised women and children.

Abigail, were you in love with Rick?

Lust at first sight is more accurate. The minute I met him I instinctively realized this was a man who knew his way around a woman and – Please God! – I wanted to be one of them, even for just one night.

What drove you apart?

Well, it’s embarrassing to admit, but I got up the gumption at my sister’s wedding ( and by that I mean I’d had quite a few glasses of champagne for courage!) and cornered him on a terrace, tried to seduce him and wound up  kissing him. I thought he was pretty into it because he kissed me back like I’ve never been kissed before or since. But then he pushed me away and basically told me nothing was gonna happen between us, then bolted back inside to the wedding. We’ve kept a wide berth between us ever since.

Why do you need his help now?

I’m still not convinced I do, but my family has other opinions on the subject. One of my client’s husbands barreled into my office the other day and physically threatened me. Unfortunately, Kandy witnessed this and told her husband Josh, who told Rick. My family is like a weird communications device: telephone, telegram, tel-a-Laine. After that, the husband stabbed his wife and kidnapped his son. When his son was found, Rick seems to believe the husband is going to come after me for retribution. I don’t believe that, but Rick is an immovable force of nature when he gets an idea in his head. It’s a charming and totally annoying character trait, for sure.
What worries you about seeing him again?

That I won’t be able to keep my feelings hidden from him, because even though he walked away from and left me freezing and wanting on a terrace, I still think he’s exactly the man I need. Trying to keep those thoughts from flying from my lips, or – God forbid my actions – is tantamount to climbing Mount Everest during a snowstorm: Deadly and difficult!

If you want to know more, you'll have to read on:

And here are the contact links for Peg if you want to know more about her and her writing: