Getting in the Spirit

Having always been a reader who enjoys finding a new series to read or an author whose work I haven't read, I was very intrigued when I heard about the new work by author Terry Segan. She lives in Nevada, though she says  the beach is her happy place, and any opportunity to travel soothes her gypsy soul. She says her imagination runs wild and she conjures up stories while riding backseat on her husband’s motorcycle. The intriguing characters, situations and settings she comes up with on those rides can be found throughout the pages of her paranormal mysteries. 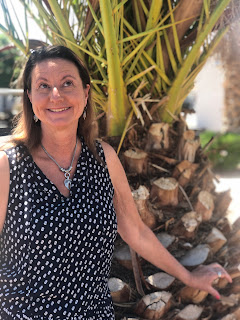 Her latest work is Spirit in Tow. It's Book Number One in the Marni Legend series.  Let's get a blurb:

Marni Legend is about to publish her thirteenth novel. Gus Zuckerman has been hanging around since his death in nineteen-ninety-five. With her deadline looming and her recently deceased mother refusing to move on, can Marni dispatch both spirits and still have time for romance?

Armed with sarcasm and a warped sense of humor, her innate ability to stumble into awkward situations lands Marni in the midst of a car theft ring. As her circle of friends becomes populated with felons and possible murderers, the lines blur around whom she can trust.

Juggling a hot new beau with one hand and rekindling an old flame with the other, she may need to put on the brakes with one. Should she pick the probable criminal who may know Gus’s fate or play it safe with the sweetheart from her past? She’ll need more than her special abilities and quick wit to navigate the twists and turns of this paranormal mystery.

Let's hear more about this dilemma from Marni herself:

What do you want your current life to be?

Spirit free. I never asked to be part of this family tradition. If Grandma had simply passed on a tendency to get thunder thighs or a furry upper lip, I could have worked with that. Nooooo. She had to give me the ability to see dead people. They pop up in my kitchen, in my car, while out with a hot date (okay, that doesn’t happen often—the hot date part. Insert frustrated sigh here.) But if that’s too much to ask, how about we eliminate just one ghost—Mom. At the age of forty-eight, I believe I’ve mastered the skill of picking out my own clothes and deciding when my kitchen needs to be tidied up (when I run out of clean dishes, right?). She doesn’t need to stick around giving advice on chores.

What would you say is your biggest strength?

I’d say it’s a tie between getting myself into trouble and throwing a sarcastic barb without a moment’s notice. Or maybe it’s because of my unique style of humor, I get into a bind occasionally. Well, more than occasionally. That’s probably not a great strength. Hmmmm. Let’s just go with I make great coffee. 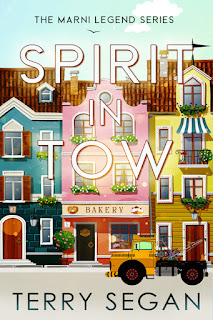 Tell us about Gus Zuckerman and your relationship with him.

I wouldn’t exactly describe it as a relationship. Believe me, had I known him twenty-five years ago, I might’ve done more than drool over a muscular hunk of flesh like him. Until he’d open his mouth to speak. Gus isn’t the brightest tool in the shed. He and I have more of a partnership working toward a common goal—both of us want to know how he died. The sooner that happens, he can move on to that big towing garage in the sky, and I can focus on finding a live guy to spend time with.

What are the difficulties you're having with your mother?

You want that list alphabetically or chronologically? She’s dead and refuses to move on. I think it’s a conspiracy created by St. Peter to punish me for underage drinking in college. Mom believes she has a bunch of things to resolve before leaving. For instance, she’s delusional enough to think my sister, Gloria, and I need to be civil to each other. (Did I mention my perfect sister who does everything right?) Mom would have better luck solving the riddle of the sphinx. I might never get rid of her! She also has doubts about my brother’s fiancé being able to put together a proper wedding. So what if the girl dresses like a hippy and is a bit spacey? I’m sure she’ll hire a Ringling brother and have the event set up in a couple hours without Mom’s assistance.

Tell us more about your complicated love life.

You think I have a love life? Aren’t you sweet to say so. I’ve gone from single and divorced to meeting two men in the space of only a couple days. I can barely handle one, but two? St. Peter must’ve had a hand in this just to continue my torment. One of the men is my high school sweetheart. That pretty much describes him—sweet. He’d always treat me right. The other guy, well, can you hear the theme from the show ‘Cops’ playing in your head? Bad boy doesn’t begin to describe that yummy morsel. I was never very good at juggling, so I expect it all to come tumbling down around my ears. But who knows? I might learn a new skill or two.

What do you want for your future?

World peace, and for my ex-husband’s much younger fiancé to get a botched boob job. You know, if the doctor could slip and make the left breast one cup size smaller than the right? My needs are few. After that I would welcome time to myself without spirits nagging me to help them resolve their issues. Couldn’t people be a little more careful about where they placed that revised version of their will leaving everything to the cat or buried that body they thought no one would ever find? These aren’t hard concepts. Until then, I suppose a romantic dinner with a handsome guy would be nice. Perhaps I should add a handsome guy who isn’t a criminal. Yeah, that would be a good detail to include on a dating profile.

Intrigued? Let's get more about Marni and her complicated love life with an excerpt:

The usual cadre of fishermen dotted the docks. If I boldly stepped onto the ship, would they know I didn’t belong? Could one be a sentry in disguise? I sauntered past, trying to catch a glimpse of any crew hanging about. The boat was in complete darkness.

Gus waited on my favorite perch. “It’s about time you showed up. Why aren’t you in all black so nobody can see you? God, you look like an amateur.”

“Perhaps because I am an amateur. I’m not the one with a criminal record.” I sat beside him.

“Who says I got a record? I ain’t never been locked up.”

It never occurred to me he’d never been caught. Maybe I should have consulted him—had he bothered to show up earlier. “This way I blend in with the tourists. If anybody comes, they’ll think nothing of a woman enjoying the fresh air.”

Breaking and Entering 101 wasn’t a class I wanted to take. “Enough about my lack of burglary skills. Go check the boat, and tell me if anybody is aboard.”

I tapped my foot on the wooden dock, concentrating on the staccato noise. It soothed my racing mind as it conjured all the things that could go wrong. My plan had two parts—break in and don’t get caught. Simple, right?
Does that excerpt have you hooked yet? If you would like to read on, here are the buy links:

And if you would like to get to know Terry better, here are her social media links:

Thank you, Terry, for being my guest today. Any comments or questions?