Sometimes a book's blurb can really grab your attention and you immediately want to know more. That was the case for me with the book, The Chief's Proposal. When I saw the title, I had wanted to know more and then I saw the blurb. That did it! See what you think. As an avid reader in summer I am always looking for a new, great read and this books seems to hold a promising story.

It is the latest book from author, Sandra Dailey. Sandra tells us that from childhood, she has moved from place to place, from Indiana to Florida, stopping in several places in between. She's also worked at a number of jobs, including as a waitress, soldier, retail manager and dental assistant.

She says the only thing she never had to leave behind was her imagination and storytelling was always her favorite way to pass time. She kept being told she should write a book, and finally she did, and she found it was a "lot of fun," so she has continued to write and we are glad she did.

She currently lives in North Florida with her husband, and she says she tortures him with crazy story lines and half written manuscripts. We are looking forward to more of them! 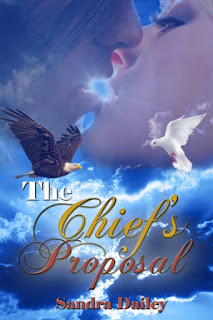 Burned by love once, Brett Silverfeather finds his bachelor life more than satisfying. He's facing re-election for sheriff, but this time the voters are looking for a family man. Brett finds himself pursuing a marriage he doesn't want.

Ginny and Brett are opposite in every way, but opposites do attract. Can Brett protect his heart as well as he does his town? Can Ginny hide a secret past that could possibly destroy her future?

See what I mean?  Don't you want to know more? Let's get an excerpt:


“Why do we need a fire?” Ginny asked.
“We need all the elements.” Brett motioned toward the lake, the sky, the ground, and back to the fire as he said, “Water, air, earth and fire.”
“Is this a Native American thing?”
Brett lowered his head and shook it. It was becoming a gesture she recognized as him gathering patience. He did it a lot around her. “Yeah, in your language this would be called a truth telling.”“What would your people call it?”
“A truth telling. Now will you pay attention?” Brett stretched out on the blanket with his head resting on his saddle. “Come down here and make yourself comfortable.”Ginny copied his pose, and then asked, “What’s next?”
“I’m going to ask you a question and you have to answer it, honestly and completely. After that, I’ll answer a question you have. What is said will stay here when we leave.”“What’s your question?” Brett turned his head to look at her. She’d never seen him look so serious.
“Why is it such a bad thing to be married to me? I know I’m no prize, but you look as if you’ve just received a death sentence.”
Ginny thought for a long moment. “I don’t know if it will be bad. I don’t really know you. I just hadn’t imagined myself being married to anyone, ever.”
And that has me wanting to know where I can get the book. Here are the buy links if you feel the same way:

Here is how to get more information on Sandy and how to get in touch with her:

Thank you, Sandy, for bringing us your latest book and what sounds like a fun summer read!
Any comments or questions for Sandy? 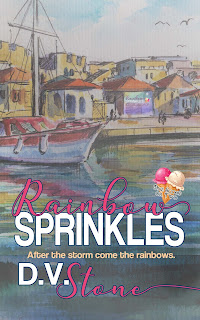