This is the perfect day to visit other worlds and that's what we're doing in My Writing Corner today.  M. S. Spencer is my guest and she is bringing us a tale from a unique realm that can get us into the mood for dark tales, but most of all,romance. Her latest book is Orion’s Foot and it just released this week. 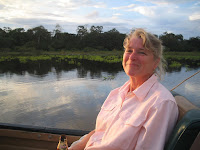 Although M. S. Spencer has lived or traveled in five of the seven continents, the last thirty years were spent mostly in Washington, D.C. as a librarian, speechwriter, literary editor, professional staff at a U. S. Senate committee and at the Dept. of the Interior, non-profit director, and parent. She holds a BA from Vassar College, a diploma in Arabic Studies from the American University in Cairo, and Masters in Anthropology and in Library Science from the University of Chicago.  All of this tends to insinuate itself into her works.

Ms. Spencer has published thirteen romantic suspense or murder mystery novels, with two more on the way. She has two fabulous grown children and an incredible granddaughter. She divides her time between the Gulf Coast of Florida and a tiny village in Maine.

Here's what she has to tell us about the origins of Orion's Foot.

Most people have never heard the word “cryptid” and indeed, Petra Steele, heroine of Orion’s Foot: Myth, Mystery, and Romance in the Amazon, learns of the name for legendary animals for the first time when she’s researching the Mapinguari, a supposedly mythical Bigfoot-like beast rumored to live in the Amazonian rainforest. A cryptid can be any of the following:


Ø  A creature from myth and legend


Ø  A supernatural or paranormal entity


Ø  An extinct animal who may still inhabit a specific area


Ø  An animal of an unusual size or appearance


Ø  An animal that doesn't resemble any known species 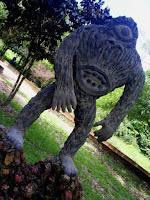 The Mapinguari, which the team of scientists have come to find, is a beast who lives in the forests of the Peruvian Amazon. It is huge and hairy and has a hole in its stomach, into which it sucks unwary villagers.  It resembles creatures found in other parts of the world—Bigfoot, the Yeti, Sasquatch. It is NOT nice, as our heroine Petra Steele, and her hero Emory Andrews, discover to their chagrin.

Now let's hear about the book and meet the hero and heroine.

Petra Steele is wallowing in self-pity after being dumped at the altar, when her brother Nick invites her to come to the Peruvian Amazon. Before she even sets her suitcase down, she's confronted with a murder victim. In a research station peopled with a quirky assortment of scientists, she is drawn to Emory Andrews, a gruff, big man with a secret past. That is, until his beautiful ex-wife shows up. More murders, more secrets, more mysteries ensue, all in the deeply romantic, sizzling jungle.


Petra
What made you decide to take this trip with Nick?
Good question. I’m not much into travel—except for the armchair variety. Both my father and brother Nick despaired of me ever leaving my beloved library (I’m a research librarian at the University of Chicago). I’d actually sent for a brochure on the Galapagos and was girding my loins to go, when Nick called and demanded I drop everything and meet him in the Amazon. He said they’d discovered something momentous. Huh. Maybe it was the free ticket; maybe it was the mystery. At any rate, I jumped a plane and three days later landed deep in the sizzling, romantic jungle. Good idea or bad? Find out in Orion’s Foot!

What is your first impression of Emory?
I wrote this in my diary my first day—the scientists are having lunch after they’d discovered the corpse of one of their own, his body ravaged by piranhas. The cook serves ceviche—made from piranha. Emory makes a joke.

Emory has a sense of humor—macabre though it may be. I watched him eat. He seemed to savor every bite, as though he’d missed too many meals and appreciated the ones he had time for. He sipped the beer rather than gulping it down like the rest of the guys. At one point, he put down his fork and rubbed his lip pensively. I wondered if he were contemplating their next steps. I thought to myself, Didn’t Nick say everyone looked to him as the leader? I dredged up the study of physiognomy I’d been reading during my last bout with the flu. Strong chin—thank God, no dimple. Tendrils of dark hair almost hid his widow’s peak. Let’s see—widow’s peak means intelligence and breeding. Strong chin? Either perseverance or obstinacy.

So, let’s say I was intrigued but, given my past with men, not really thinking beyond that.

What do you fear about him?

That he’ll leave me like all the men before him. George—he was the last. Let me tell you about George:

“Three years in which her career stalled while she followed him around the world. She made every sacrifice required, tolerated his workaholic habits, kept any disagreement to herself to avoid his explosive temper, saw any chance of children slip away. And for what? She remembered vividly the upturned faces of her family sitting in the front pew, still heard the music start up for the fifth time. Suffered again through the sympathetic expression on Reverend Drudge’s face as he handed her the note. Never again.”

I swore off men and plunged into work. Emory has secrets. I don’t yet know what they are and I can’t risk being hurt again. Besides, I really don’t think I have it in me to make another windmill tilt at love.

What do you like best about your current life?

Well, I’m not all that happy, to be honest. See, I had some academic issues, and now find myself roving the world looking for guest lecturer positions. I jumped at this grant to go the Amazon, thinking I might discover a new bird species. Instead, I found an intriguing woman, and a great hairy beast. Things could be looking up.

What attracts you to Petra?

Let me tell you what I told her:

“You have a generous soul…I can see it in your eyes. You didn’t know Lewis, but you looked more sad than frightened when you saw his body. You always make eye contact with everyone, even the skittish little Capac. The monkeys adore you almost as much as they do John.”…

“Of course, having chestnut hair cut in a fetching gamine style, not to mention eyes the color of the Hope diamond, doesn’t detract from the generally pleasing impression.” He stood up and touched her forehead. “The slender body—graceful but trim—the elfin little ears, and the perky butt, also contributed to my positive assessment.”

Too much? She seemed to appreciate it.

They went back down the path they’d come, surveying the ground and vegetation for any trace of a large animal. They had reached the mahogany tree when Petra checked her watch. “Winston’s been gone half an hour. Maybe we should—” Her words were cut off by a low snarl. “Emory? Is that you?” She whirled around. “Where are you?”


For answer, the growl grew deeper and more menacing. Sounds like a gorilla—but they don’t live here, do they? She whispered, “Emory?”


“Shh.” She looked up. Emory clung to a low branch of the mahogany tree. He held a hand out. “Quickly.”


She grabbed a liana, hoping fervently it wasn’t a Strychnos vine, and scrambled up. The growl came again, closer. They climbed higher. Something crashed through the woods, puffing. Whatever it was entered the clearing, and the noise stopped. Petra held her breath and Emory’s hand. It must be looking for us. After a lengthy pause that left her feeling chilled to the bone in the torrid heat, the puffing started again, gradually diminishing into the distance. She waited five more minutes to be sure it was gone before whispering, “Did you get a look at it?”


“No, the foliage was in the way, but it sounded awfully big. And grouchy. I’m going to—” As he started to climb down, a twig snapped below them. They froze.


Something’s being dragged through the underbrush.


Want to read on? Here are the Buy Links:

Thank you, Melissa, for being my guest today.

Posted by Rebecca Grace at 3:30 PM