One of my favorite movies of all time is Camelot. My sister and I must have seen that movie 20 times in theaters back before VCRs made multiple viewings possible. Once we even stayed through all the showings and ended up walking at least 5 miles home because bus service had stopped at 10pm. It was a long movie!
Anyway, one of my favorite lines from that movie (and there were plenty - we can still recite the first few scenes) was when little Arthur asks Merlin what the best remedy is for feeling sad. My favorite line is Merlin’s answer:  “Learn something.”


I’ve always believed in that. It is one reason I love to research. Learning about the past or new worlds is great fun. But there is more than just ordinary research. To me learning also means going some place I’ve never been, seeing something I didn’t know was there. My father was a great believer in going down strange roads just to see what was at the end. We ended up at a lot of dead ends, but we also got to see some great places we wouldn’t have found if we hadn’t gone there.
As a writer I love to follow those unknown paths or roads just to see what you may discover along the way. My older brother recently moved to New Mexico and he spends every Sunday morning driving the roads around Santa Fe and then sending us pictures of what he discovers. He finds lots of new little towns and meets lots of new people.


When I take those strange roads, I always look at it as a way to research a book. I like to absorb the atmosphere and look for how I might write a scene set in that location. Sometimes it can get me into trouble.
Once when I was young and driving around in January I took a road off I-70 into the mountains just east of Fraser, Co. If you know that part of the country it is no place to be when you’re all alone in a Mustang, unfamiliar with the area, in the dead of winter. Add to that being on a strange winding road that goes from pavement to snow packed to gravel. When I got to the bottom of a particularly long hill, I decided I’d learned enough and tried to turn around on the snow packed road, I slid downhill and got stuck in a ditch.

Needless to say I had to walk out to the freeway, but it gave me plenty of time to think of a story. Unfortunately that story never sold, but I still use that technique. Show me a new place and I’m probably going to follow those strange roads and find something new and learn something new. 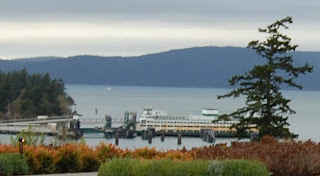 I am forever telling my family and my friends how much I enjoy travelling adventures like that, and I'm certain that soon I'll be driving down some unknown road and finding a new story!
- February 29, 2012