Go Back in Time for Fun Summer Reading 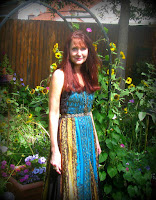 Today we continue our fun summer reading with a look at author Mary Gillgannon and her new book, Wicked Wager.  She's the author of 15 novels set main in the dark ages, medieval and English Regency time periods.  When not writing or working at the public library, she loves reading, gardening and travel.

I asked Mary about her new book and how she came up with the idea for Wicked Wager.


Although I am boringly feminine now, when I was a kid I was a tomboy. I loved climbing trees, riding bikes, fishing and camping. I also loved animals, and although I had few opportunities to be around horses, I’m sure if I had a chance I would have been “horse mad” like my heroine, Penelope (Penny) Montgomery.


That’s really where the story for Wicked Wager started. I envisioned a grown-up tomboy, who loves to be outside working with horses. Penny has no interest in most “lady-like” pursuits and she’s fiercely independent. Of course, to make it fun, I paired Penny with a man who appears to be her opposite. Marcus Revington lives in and makes his living as a gamester, spending most of his time in gambling hells and clubs. He’s elegant and well-dressed and what we would consider “debonair”. Quite a contrast to Penny, with her men’s clothing and messy hair!


But even though Penny and Marcus appear to be opposites, they are actually a lot alike. They are both down-to-earth, unpretentious people who work hard and are very loyal to the people they care about. But it takes them a long time to discover the things they have in common. And by the time they do, there are complications that put their “happily ever after” very much jeopardy.


What I like best about Marcus is that despite being a gamester, and making his living by hiding his emotions, and presenting himself as cold and ruthless, he’s actually a very honest and straightforward person. He doesn’t care about status or social class and accepts people for who they are. He is also very passionate beneath his aloof exterior. When he falls for Penny, he really falls, and he is willing to do almost anything to keep her in his life.


I really enjoyed writing Penny’s story because she is lively and fun.

So enough of this current summer heat. Let's go back in time to another kind of fun heat with Wicked Wager, this week's summer getaway reading:
When hardened gamester Marcus Revington wins Horngate Manor in a card game, he is delighted to finally own property. Even discovering he must marry the heiress of the estate doesn’t deter him. The heiress, Penny Montgomery, is happy with her life raising horses at Horngate and has no desire to wed anyone. When she learns about her guardian’s Wicked Wager, she schemes to convince Marcus she’s unsuitable as a wife so he’ll forget his plan to marry her. Who will win this battle of wits and wills? Or will they both discover the name of the game is love?
Sounds like a perfect book to read by the beach, pool or sitting in the shade while you're out camping or in the evening on the patio. Let's read an excerpt.
Both men turned at the sound of hoof beats. A huge stallion came barreling down the drive, its rider bent low over the withers. Halfway to the house, the rider reined in the magnificent animal. Blowing and snorting, the beast slowed to a trot and, finally, a walk. As horse and rider approached, Marcus couldn’t help gaping at the young woman controlling the stallion. He'd never seen a female ride like that before!
She halted the stallion, and before either of them could assist her, leapt down and faced them. The woman was dressed in soiled men’s clothing and her brown hair hung down in messy wisps around her face. “So, which one of you is the bloke I’m supposed to wed?”
James gestured to Marcus. “This is Mr. Revington. I’m James Ludingham, his solicitor.”
The woman extended a grimy hand to Marcus. “Pleased to meet you.”
Marcus stared at her in astonishment “You’re Miss Montgomery?"
"Yes, but you can call me Penny, everyone does. The house is there, see.” She pointed. “Mrs. Foxworthy will offer you something if you knock. I really can’t be bothered with playing hostess. I’ve got to get back to the stables. We’re gelding the colts today and they need me to do the cauterizing. Good meeting you though, Mr. Revington, Mr. Ludingham.”
She turned and mounted the stallion, then cantered back down the lane.
“Hmmm,” James said. “What were you saying about marrying the woman sight unseen?”
Marcus swallowed, trying to get over his shock. “I’ll allow she is a bit eccentric, but that hardly matters. It’s really quite simple. She’ll go her way and I’ll go mine.” His words belied the uneasy feeling in the pit of his stomach. Gads! The chit was an utter hoyden. He'd encountered orange girls who had more polish than Miss Montgomery. But at least she wasn't unattractive. Despite the dirt and her disheveled hair, she had huge blue eyes and pert, pretty features, and the masculine clothing she wore only served to emphasize her leggy but clearly feminine form.
“There is the small matter of the marriage ceremony," James reminded him. "Unless you think to get a clergyman to perform the rites in the barn, you may have a problem.”
“Well, she’s bound to come back to the house sometime. We’ll discuss the details then. Meanwhile, I’m starved. Let’s hope this Mrs. Foxworthy is a bit more hospitable than her mistress.”
Here are the links to buy Wicked Wager.
Thank you, Mary, for being my guest.  Any questions or comments for Mary?