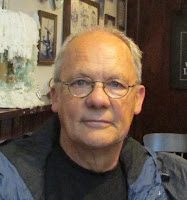 We are heading south today to a small college campus to meet Lam Corso, the hero of a new mystery thriller novel. Our guide is author Gary Guinn from Arkansas. He writes literary and mystery/thriller fiction. His first novel was published in 2005 and his poetry and fiction have appeared in a variety of magazines, and his short fiction has appeared in several anthologies.

His newest book, Sacrificial Lam, was released recently by The Wild Rose Press. It is set on a small Southern college campus. Gary tells us his favorite pastimes are reading, writing, traveling, and brewing beer (and of course, drinking it).

Let's find out more about Lam and his adventure:

When English professor Lam Corso receives a death threat at work, he laughs it off. A liberal activist teaching at a small Southern conservative college, he's used to stirring up controversy on campus. It's just part of the give and take of life. Even when violently attacked, Lam is convinced it has to be a mistake. He can't imagine anyone who would want to kill him for his beliefs.

When his home is broken into and his wife's business vandalized, Lam is forced to face facts. The police can't find a single lead. Lam's wife—a passionate anti-gun crusader—is outraged when Lam brings a gun into the house for protection. Left to their own devices, Lam and Susan must examine their marriage, faith, and values in the face of a carefully targeted attack from an assailant spurred into action by a different set of beliefs. What will it cost to survive?

Because I love to know more about fascinating characters, naturally I have some questions for Lam. Tell us a little about your past and what made you decide to become a teacher?

The college where I did my undergraduate work had an inner-city program. They took groups of students to Chicago for three weeks over Christmas break to work with at risk kids. I participated during my sophomore year, and it changed my life. We worked with the kids on literacy. One of the young guys in my group made great strides the first two weeks, and I got close to him. He didn’t show up for week three. I found out just before we left the city that he had died in a gang shooting. The news was devastating. Working with him, seeing him get excited about learning to read, had been the most satisfying thing I’d ever done. Literacy might have helped him escape the inner city. When I returned to the college, I enrolled in the education program.
What do you like best about teaching?
I grew up with books. I loved to read. When I decided to teach, I thought literature would be a good field to get into. It turned out to be a perfect fit. I love working through a piece of great literature with students and seeing the light come on in their eyes, seeing them smile when they get it.
Least?
That’s easy. Administrative gobbledygook. If professors at small colleges could just teach, put all their energy into their work in the classroom, their lives would be so much more rewarding. But at small colleges, everyone has to serve on committees and turn in reports and do all kinds of evaluations. Those are onerous tasks to most teachers.
Lam, you’re a liberal thinker, but you teach at a conservative college.  Is there a reason you chose to work there or is there another story behind your job?
It’s a simple story, really. I was married, just finishing up my PhD. First baby was on the way. PhD’s in English are a dime a dozen, so when I was offered an interview at Mid-South Methodist, I jumped at the chance. I toned down my more radical progressive ideas for the interview. I got the job. I thought I’d be there a couple of years, build my resume, and then find a better job at a state school. But I found that I, and a handful of other liberal professors on campus, served a really valuable purpose in offering students another way of looking at the world. Students on the fringe of the status quo reached out to me. I became a mentor to some of them. And I developed close friendships with some of the other liberal professors, especially one of the professors in the Psychology Department. A couple of years stretched into a dozen.
Fill us in on this new trouble you appear to be in?  Any hints of what’s going on?

Well, though the university treats liberal professors even-handedly, our fit in the college community is sometimes difficult. There are some faculty, staff, and students who express dismay at the fact that the school hired liberal professors in the first place. There is particular outrage whenever one of us outspokenly supports liberal social causes, especially causes related to LGBT or immigration. Reproductive rights for women and the environment are also hot-button issues. But I never felt threatened, never felt that anyone on campus was capable of lashing out violently.
That changed when I arrived at work on a beautiful Friday morning and found an envelope under my office door that held an anonymous death threat. I thought it was a joke by one of my colleagues in the department. But that evening I was run off the road while riding my bike, and a few days later I was attacked in the parking lot after dark. It was a narrow escape. The police and campus security are now involved, but they have not been able to find anything that points to a suspect. I’m beginning to worry about my wife and two boys, nine and six years old.
Our readers love romance.  What drew you to your wife and what makes the two of you work as a couple?
My junior year in college, my roommate talked me into going to a peace rally. He said that’s where the good-looking women would be. I had nothing else to do, so I went along. And there she was, holding up a sign that said, “Schools, not Bombers.” Well, I agreed with the sentiment, but it was the eyes and the lips, that incredibly sexy crooked smile, and the knockout figure that slew me. We talked, hit it off. I took her to a coffee house after the rally. We talked till two o’clock in the morning. I was already in love.
But we’ve had a great marriage because of more than physical attraction. She’s an incredible person. She runs a very successful screen-printing business she started in high school. She founded and runs a regional peace center that is active in political and social issues. We’ve both become activists in issues of peace, the environment, and immigration.
What’s going on now with the death threat and attacks is putting a strain on our family and our relationship.
What would you say is your secret or hidden passion?
I’ve always wanted to live on a sailboat in a small harbor of a small island off the coast of Greece. To get up every morning and dive into the Aegean Sea. To sit in a deck chair and watch the sun set on the ocean, with Greek folk music coming from the dock. A glass of wine. Fish on the grill.
Thank you, Lam, for sharing your story with us. Here are the buy links:


And thank you, Gary, for bringing us Lam.  Any questions or comments for Gary?