A Hard Lesson OR Judging a Book by the Cover

Some times things just need to change. We get an idea into our heads and we’re convinced that it’s a great idea or plan, but sometimes as a writer you go off in the wrong direction without even realizing it. Sometimes we just need to look at life a little differently.

Have you ever picked up that book at a bookstore or on the fly thinking it was just what you wanted to read because of what was on the jacket or the cover? Have you ever found out later you were dead wrong? I know I have.

This can happen in our own writing too, or in our own decisions as we chose a book cover for our own work. Today instead of focusing on an author or a new book, I am going to focus on a different look for some writing books that have been around for a while and why as the author you really do need to pay attention to that book cover design.

Several years ago I began writing a series of how-to books with fellow author and critique partner Sue Viders.  We have critiqued each other’s books and often taught classes together. We were co-authors of a book on creating characters with two others authors.

Last year we began publishing a series called, Let’s Write A Story.  Our first book, Seven Ways to Plot was published in the fall, followed several months later by Creating Characters. After much discussion, we agreed on a logo featuring Dottie, the Writing Mouse, and she soon adorned our covers on our first two books. 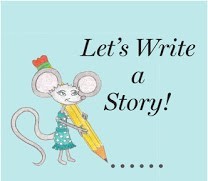 A mouse with a message.

Unfortunately, I discovered at several book signings that Dottie was also misleading. People do JUDGE books by their cover.

She was giving readers and shoppers the wrong idea about our educational book. At one signing session at a library, I kept getting questions about whether our book was a children’s story and at another I got questions about what kind of adventures Dottie took part in, or how old the children had to be to read Dottie's book.

Obviously we had people wanting Dottie for a different reason than we intended. NO one seemed to grasp that she was around to help someone learn to write. She wasn’t on the cover to alert anyone to her upcoming adventures, unless you want to talk about plotting an adventure or creating an adventurous character.

So after some soul searching and sadness, Dottie is now gone. She has been relegated to a holding pattern and we have removed her from the cover of our books. We are giving them a whole new look and hopefully a whole new feel. The writing books are the same – step by step guides aimed at helping beginning or intermediate authors come up with wonderful characters or learn the best way for them to plot their next or first novel. 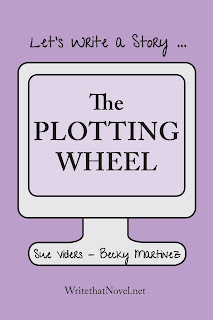 Our next book in the series is coming soon, The Plotting Wheel, providing a proven method that can help any writer develop a cohesive plot in 12 easy steps. We’ve taught the class online for several years and writers who follow all the steps can have a plot by the end of the course or the end of this book.

So while Dottie has taken a step back among the bookshelves, and the look is new, the information still stands. Sometimes you need to take that step back, give your work a good hard look, and then make changes when necessary.

Alas, sometimes people (or readers) still do judge a book by its  cover.

We hope you like the new look. And we’re hard at work on the next book in the Let’s Write a Story series – Creating Great Villains.

Perhaps if we ever get around to writing a book on writing children's stories or on a mouse with plenty of writing adventures we can bring Dottie back.

All the books are or will soon be available on Amazon in both Kindle and print form.