Get Cozy with a New Mystery 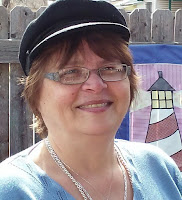 Cozy mystery novels have long been among my favorite reading material, and it's always fun to find a new series to follow. Today's guest in My Writing Corner is author LeeAnn Betts, who writes cozy mystery novels, while her real life persona, Donna Schlacter, writes historical suspense.

LeeAnn has released five titles in her cozy mystery series, By the Numbers. Her latest book, Hidden Assets,  was released in June and it sounds like just the right title to end the summer reading season.

Let's have a look at Hidden Assets.

Carly Turnquist, forensic accountant, responds to a call from her friend, Anne, who is in the middle of a nasty divorce, and travels to Wyoming to help find assets Anne thinks her husband has stolen. But the mystery begins before Carly even arrives when she sees a man thrown off a train. Except there’s no body. Husband Mike uncovers an illegal scam in a computer program he has been asked to upgrade, and then Anne is arrested for her ex’s murder.

Can Carly figure out what’s going on, and why a strange couple is digging in Anne’s basement? Or will she disappear along with the artwork, coins, and money?
This calls for more!  Here's an excerpt:


Carly pushed through the door into the small foyer between cars, and paused. The sun was well set now, and their train seemed to be slowing. She stepped nearer the window and raised the glass. A porter passed by, and she turned to him. “Excuse me, why are we stopping?”
“Nothing serious, Miss. Just to let the express westbound train pass.”
“Okay, thank you.”
She turned back and breathed in the smells and sights of the train. Diesel. Squealing brakes. The smell of hot metal. Cool evening air. Apparently, May in Wyoming wasn’t as warm as May in Bear Cove. And as the train settled to a halt, the hissing of steam, the groaning of metal coming to rest.
Faint at first, then building in volume, metal wheels on metal tracks drew closer. A train horn, low and mournful, recognizable anywhere, sounded from behind her train. And then the westbound express streamed past. In one of the passenger cars, a small boy waved at her, and she waved back. In another, somebody pulled down the blind. In yet another, two men struggled on an open platform between two cars before one fell over backwards on the opposite side of the train. The remaining man peered over as he gripped the ladder leading to the roof of the car, then adjusted his jacket and stepped back inside the car.
She gasped. And blinked. And craned her neck to look at the train passing by again.
Had she seen what she thought she saw?
Surely her overactive imagination was simply playing tricks on her.
And if not, somebody would raise the alarm and stop the express train.
But the final car passed her, and all she saw were the tracks, glinting dully in the moonlight, and a foot, propped at an odd angle, the rest of the body out of sight on the slope running down and away from the track bed.
The diesel engines on her train revved and moaned with the effort of starting their forward momentum again, until finally the wheels beneath her spun, gathering speed, and her train pulled out onto the main track once more.
Hurry, hurry. Catch up with it! Her mind screamed, but her body froze in place, her fingers gripping the bottom ledge of the window.
Her heart pounded in rhythm with the powerful diesel engine pushing and pulling her train. For several moments, she was certain she would faint.
But she was not the fainting type.
She was the action type.
She glanced from left to right, hoping Mike had come back looking for her.
But no, he wouldn’t. He couldn’t have been gone more than three or four minutes. He’d think she was still trying to decide which book to buy.
She stepped into the gift car. Maybe if she changed her surroundings, she’d realize her imagination had almost run away with her. Because otherwise, what she’d seen was too horrible to even consider.
To throw a man like a piece of trash off a fast-moving train was unthinkable.
Inhuman.
She needed to find someone to help her understand what had happened.
There had to be a rational explanation.
There had to be.


Because otherwise, that reality was just too much to consider.

If you would like more information on Leeann or Donna, she has written a devotional for accountants, bookkeepers, and financial folk, Counting the Days, and with her real-life persona, Donna Schlachter, has published a book on writing, Nuggets of Writing Gold, a compilation of essays, articles, and exercises on the craft.

She publishes a free quarterly newsletter that includes a book review and articles on writing and books of interest to readers and writers. You can subscribe at www.LeeannBetts.com or follow Leeann at www.AllBettsAreOff.wordpress.com All books are available on Amazon.com in digital and print, and at Smashwords.com in digital format.


Thanks, Leeann/Donna for being my guest today! Any questions or comments?