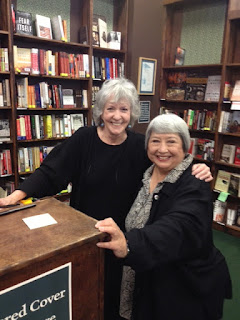 Normally in this space every week I look at new books that are coming out or have just been released and talk to the authors or characters about their story and writing journeys.  But this week, I am looking at new beginnings.  They are reflected in the new work I am doing and also the new look of my blog.  I've always looked at the new year as a way to either start a new project or get a fresh perspective on old projects or stories I've been working on for a while. It's also an opportunity for looking back -- at things and people who have made a difference in my writing and wanting to be a better writer.

One of those writers who first struck a chord with me as a writer is no longer with us, but she  had a big impact on me. I'm certain her work will continue to influence me and a good many would-be suspense writers in the future. I'm speaking of Sue Grafton, who wrote the Kinsey Millhone mystery series. When I heard of her death I felt like I had lost an old friend, even though I'd only met her a couple of times. Her death touched me because I felt like every year or so I would get the opportunity to check in with Kinsey and see what sort of trouble she was in now.

I first discovered Kinsey way back in the 80s on a trip to Santa Barbara, and it struck me how similar Kinsey's hometown of Santa Teresa was so similar to it. (Duh!) The first book I read was "F is for Fugitive," but it sent me looking for all her earlier books. I was thrilled to find a number that I had to catch up on. After  getting through A - E, I was forced to wait for G, and I've kept up with every book ever since. Actually I not only read them all, I found myself buying the audio versions just to listen to them all again.

I've just finished listening to X, and I feel sad knowing that Y will be the final book I get to listen to. If I can find all of those audio tapes, I may listen to them all again!

But it wasn't just reading her books that touched me. Listening to her talk about her writing and her feelings about Kinsey at a booksigning in Denver and then the thrill of meeting her was a special treat for me. Getting the opportunity to listen to her talk about her beginnings as an author at a Left Coast Crime gathering in Monterey a few years later was even better.  Hearing her talk about working as a "script girl," and wanting more only made me aware of the struggles we all face. Best selling authors don't pop out of the bookstore shelves without a lot of work and she put in the hours.

So this year I am committing myself to new beginnings with my writing and working harder at getting books not only written but published.  I have more stories to tell, so I plan on getting them told! I may not have an alphabet to get through, but when I think of Sue Grafton and her drive to get through the alphabet it makes want to work a little harder to get those stories that are in in my head down on the written page.