A Date in Space

When I first began checking out novels from the library (as opposed to children's books from the school library) I fell in love with science fiction. Well, perhaps it was because my older brother had been reading sci-fi books and I would sneak them out of his room and read them after he finished and before he returned them. Naturally when I began reading grown up fiction I still read science fiction... until I discovered my next love affair with a genre -- romance. So naturally I was quite excited about our guest today in My Writing Corner -- Haley Cavannaugh -- and her new book Astraeus. 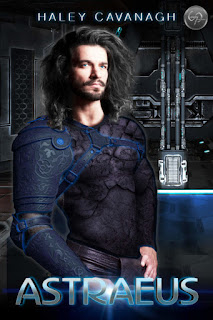 Haley is military veteran, wife and mother who says she loves diving into any book that grabs her interest.  She is a graduate of Columbia College and loves spending time with her family when she's not writing. Here's a blurb:

When Dr. Sakota Thorell signed onto the mission to scout out a new, habitable planet, she knew discovering extra-terrestrial life was always a possibility. But she never expected to find an alien adrift in space, nor for that alien to be so intriguing. Sakota feels an instant and undeniable attraction to Astraeus, but represents a million possibilities, and just as many threats.

There are others hunting Astraeus, and his rescue may cost Earth its last hope.

“What are you called? What’s your name?”
He opened his mouth, and she moved closer, eager for his first words. Instead, he focused on her lips with obvious fascination. His intriguing eyes caught the light. Despite her disappointment that he couldn’t speak, a rush went through her. Alien or not, he was the most handsome man she’d ever laid eyes on, with the kind of ethereal elegance some upper-class, privileged men on Earth spent fortunes on plastic surgery trying to achieve.
“It’s okay if you don’t want to talk, or if you can’t. We’ll get there. Now, I’m going to check you.” She kept her voice gentle, as she might use with a child. She pressed the button to disengage the protective bubble over the med bed and shone the retinal scanner in her own eye to demonstrate. “I just need to look at your eyes with this.” She motioned with the scope to him. “It won’t hurt. I promise.”
Warm puffs of his breath blew on her neck as she leaned in. She paused, noting the remarkable eight-pointed star-shape of his pupils. The mutation was his one physical difference, and only if one looked closely. The pupils dilated when hit by the scope’s light. She’d never seen eyes as remarkable.
“You’re doing great,” she soothed. Her head burst with countless questions. Where are you from? How did you get here? What do you want?       He appeared to like the cadence of her voice. His posture relaxed, and his breath against her was steady. How long had she been staring into his eyes? Should she push her luck and try to examine his mouth?
Before she could try, his finger stroked her inner arm. He was still restrained at the wrists, but he could reach her.
She allowed it. He stroked a featherlight finger along her forearm. As he did so, his gaze never left hers. She offered a kind smile. “That’s right. Friend. Sakota. Sa-ko-ta.”
He opened his mouth and let out a chicken-like squawk. “-Ota,” he said in a throaty, deep voice.
She raised her eyebrows. “Good. Very good.”
He tilted his head, watching her lips. “Gooood.”
Excited, she lowered the retinal light. “Can you understand me?”
He looked confused. “Me…”
“Okay. That’s a no. Then let me take this opportunity to say, in no uncertain terms, you, my friend, are the stuff of dreams and legends. I’ve waited my whole life for this. Are you getting this, Alistair?” she called out.
He came in over the speakers. “I am. Amazing. I’ll get to work on a linguistics program. Our friend seems to want to communicate.”
She moved to pull away, but the man’s fingers closed over her wrist.
“Let me go.” She jerked her arm, but he wouldn’t release his grip. She gave him a cautionary look, and he loosened his fingers, though he still held her. Warning bells went off.What if he’s not here in peace?But his eyes sparkled impishly. He seemed to enjoy her skin pressed against his. Maybe he hadn’t been touched in a while. Or maybe he had a crush. Who knew.
Before she could extricate herself, the intercom chimed. “Sakota, are you okay?”
“Yeah, I’m fine. He’s just being friendly—”

If you want more information or want to get in touch with Haley, here is her contact information: