Escaping to Romance in the Desert

Sitting in snowy Colorado on a cold winter day, I find that there is nothing better than finding a wonderful romance to read while sipping hot tea or chocolate. And it's even better if the romance is set in a warm climate like Arizona. Today's guest in My Writing Corner is Charlene Namdhari and her newest book, Daredevil's Mistress, sounds like just the right formula for dealing with cold temperatures and snow! 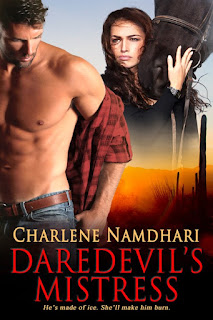 Twenty-four-year-old virgin Samantha Harman longs to escape her boring life and overbearing father in South Africa. She gains temporary freedom when she visits a friend's ranch in Arizona. Her father's price for letting her go? Return to an arranged marriage. But an unexpected attraction to a sexy cowboy is hard to fight and soon she's in bed with the devil.

Cody Bentley, a hardworking no-nonsense rancher, has been hurt before. To him, women are wanton troublemakers out for gold. Then his sister's feisty friend comes for a visit and ensnares him in a white-hot passion that threatens to melt the icy wall around his heart.

Will Samantha dare to defy her father's demands and convince Cody to take a chance on love?

Charlene, thanks for introducing us to your book. Tell us a little about how you became a writer.  I still can’t believe I’ve published a book. So, I have to get used to the idea of being called an author. To answer the question though, English and Art were my two favourite subjects in school. In English it was the literature and comprehension and in Art it was drawing. I guess the creativity and love for writing essays in school combined itself to make try my hand at writing. I wrote my first full length story fourteen years ago but only as a hobby.

I think a saturated market which gives the reader a bigger choice but authors have to work harder to get their name out there. My biggest lesson. Don’t procrastinate. Since my book was announced, I’ve built relationships with a lot of published authors and they tell me it’s a tough market. I’m eternally grateful to The Wild Rose Press for giving me this publishing opportunity and to Judi Mobley, as my editor she also played the role of mentor and guide for which I couldn’t be grateful enough.

How do you come up with characters?

With this couple, the opposites attracts both in their behavior toward each other, cultural backgrounds and discovering the meaning of true love. Cody is an alpha male. He’s arrogant, downright rude and sexy as hell. I love my men with a bit of arrogance especially when they’re confronted by the tenacity of a feisty woman who throws them completely off balance. Then they’re unsure how to handle said woman who gives as good as she gets. Both in love and war. He may come across as too arrogant but he has his reasons and if you give him a chance he’ll show you just how ardent he can love too.

The perfect description for Samantha would be  a feisty virgin. Some may see her as naïve and ungrateful but when you’re told how to live your life every single minute of every day, you’re bound to become a rebel. All she wants is a little bit of freedom and to find love not have it forced on her by her father’s wishes to marry the man he wants as his son in law. She believes everyone should be given a chance to learn what love is truly about. Is she too naïve and doesn’t understand her own sexual response to Cody? I’d say yes. Why? When you come from a sheltered background where every move you make is monitored, you tend to become surprised by the way in which your body responds to a sexy man. It’s only natural I would think.

Tell what made you want to write this particular book?

I think like most authors, inspiration for our books comes from some aspect of our lives or experiences we may have had as we grew. The inspiration for Daredevil’s Mistress stems from a facet of my life when living and loving was dictated by family norms. I was raised in a household where respect was important and you didn’t go against the wishes of the elders. Daredevil’s Mistress revolves around Samantha Harman, who wants to find love on her own and not as dictated by her overbearing father and Cody Bentley, a hardworking cowboy, who believes woman are nothing but trouble after his past experiences.

What are you working on right now?

Currently working on Book 2 which is based on Cody’s brother and his relationship.

Thank you, Charlene, for bringing us your newest release!