I continue to look for new books and audio books to enjoy and I keep finding so many that are wonderful that I never had time to read in the past. Today's guest author  in My Writing Corner, Helen C. Johannes has a new offering that really hit the mark. It's a pleasure to get away to a far off land and follow a journey filled with danger, adventure and romance.
Helen writes award-winning fantasy romance inspired by the fairy tales she grew up reading and the amazing historical places she’s visited in England, Ireland, Scotland and Germany.
She tells us that she writes tales of adventure and romance in fully realized worlds sprung from pure imagination and a lifelong interest in history, culture, and literature. She writes of warriors on horseback, women who refuse to sit idly at home, and passion that cannot be denied or outrun.
She says that’s what readers will find in her books, so let's get a taste of her latest romantic adventure. 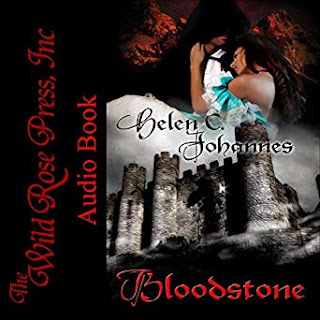 What if looking at the face of the man you loved meant death?
Years ago, warrior Durren Drakkonwehr was cursed by a mage. Now feared and reviled as the Shadow Man, he keeps to himself, only going to town to trade rare bloodstones—petrified dragon’s blood—for supplies. Though he hides his face, he can’t hide his heart from the woman who haunts his dreams…
Needing bloodstones for a jewelry commission, Mirianna and her father journey across the dreaded Wehrland where the beast-men roam. When their party is attacked, only the Shadow Man can save them. Strangely drawn to him, Mirianna offers herself in return for her father’s rescue.

Living in the ruined fortress with the Shadow Man, Mirianna slowly realizes that a flesh-and-blood man, not a fiend hides there in hoods and darkness. But are love and courage enough to lift the curse and restore the man?

Want to know more? Let's get an excerpt:

“What about us? What do we do?”
Only the hood rotated, cocking with exaggerated deliberation. “Why, you die, old man.”
Her father blanched. His grip on Mirianna’s arms faltered.
She saw the Shadow Man turn, saw the muscles of his thighs bunch as he prepared to leap down the hillside, saw, in the corner of her eye, shapes gathering along the tree line below, horrible shapes she’d seen only hours before rushing at her from a darkened clearing. With a shudder, she broke from her father’s grasp.
“Please!” She reached out to the black sleeve. “Help us!”
He recoiled at her touch like one snake-bitten. The sudden, sharp focus of his regard staggered her, but she backed no more than a step. No matter how he terrified her, he’d helped her once. She’d been led to him again, and not, her instincts told her, without reason.
“Please,” she repeated. “Help us. I—we’ll do anything.”
“Anything?”
His voice was a whisper that caressed flesh. Mirianna’s stomach quivered. Her breasts tingled. Her mouth grew even drier. Without thinking, she slid her tongue along her lips. Vaguely, she wondered what she’d done. And why time seemed suspended, as if everyone but she and the Shadow Man had been cast in stone and all sound arrested. All sound except the taut, guttural repeat of his question.
“Anything?”

I don't know about you, but I want to read on … or listen on. Here are the buy links.
Book Links:
Amazon: https://www.amazon.com/Bloodstone-Helen-C-Johannes-ebook/dp/B00G8GTHRC
Nook: https://www.barnesandnoble.com/w/bloodstone-helen-c-johannes/1118715556?ean=2940148119272
Audible: https://www.audible.com/pd/Bloodstone-Audiobook/B07KFQKTMB

If you want to know more about Helen and her books, here are the links: