Going Back in Time

With the hot days of August keeping us inside in the cool air, this is the perfect time to find new authors and new stories. Today's guest in My Writing Corner is author Colleen Donnelly who brings us a story from the Old West--a location I've loved visiting in books and movies since my childhood.

Born and raised in the Midwest, Colleen studied and worked in science, using that career to travel and explore other parts of the country. An avid fan of literature, both reading and writing, she loves tales involving moral dilemmas and the choices people come up against. A lover of the outdoors as well as a comfy living room, Colleen says she is always searching inside and out for the next good story.

Welcome Colleen! Have you always wanted to write fiction?

I believe storytelling was born a part of me. I dabbled at it in childhood, relegated it to purely homework in my teen years and college, then set it aside completely until my career and family were well established. Then, I wrote a stage play, of all things. I followed that with several others until one excelled in a national contest. That gave me the courage to try short stories and then at last, novels.

Maintaining a thick skin, persevering, and forgiving yourself for lousy first drafts.

I decided to wear and keep a thick skin when I first stepped into the public with my writing. We won’t please everyone, and I accepted that. But I still read every review and try to learn from each one, no matter how painful.

Perseverance has to follow the sometimes brutal beatings we take from others and ourselves, and be there when we’re utterly fed up with a manuscript. I may occasionally close my laptop and walk away, but the desire to write is like an eternal flame. It continues to flicker. And eventually, I return and fan it again.

And finally, no morbid first draft will ever look like the great American novel. Beauty is crafted, penned, and re-penned before it is ever published…or should be published. First drafts sound elementary, dry, and pointless. It takes an act of faith to see the finished product on the far, far, far horizon. And an act of the will to get it there.

I was told in my first writers’ group meeting that a person has to write five novels before one is good enough for traditional publication. I believed, along with countless starry-eyed others, that my first novel would be amongst the few that broke that rule. Not. I wrote four books no publisher would consider. Then my fifth was accepted, but only after much polish and multiple edits. It also went on to become an Amazon #1 Bestseller, surpassing the big names of historical fiction writers I admired. In shock, I set about figuring out why that story was such a success and have since combined that knowledge with inspiration, something no book will blossom without.

Plot occurs to me first and I build my characters from the dilemma I want to explore. So I craft my primary characters, but my best secondary ones have written themselves, not just their roles but also their personalities. Now, to give a character a name is forever a struggle for me. I steer clear of self-invented names, gender-confusing names where the reader can’t be sure whether the character is a male or female, names that begin with the same letter in a single book, or names I’ve used in prior novels. Then I sort through the names of people I know and either avoid assigning them to villains or dismiss any who might still have an axe to grind with me. Ha!

Moral dilemmas. They either occur to me or I run across one in real life that I tweak into its own story. Brutal honesty here—I was betrayed once in a marriage, so adultery became a theme of mine in several books. Talk about writing what you know! And strangely enough I didn’t hack the offender to death, but instead wrote the rocky road to wholeness and recovery. I’ve been a spectator to dilemmas friends have gone through that would make excellent books, but I never write the exact truth as it happened or friends’ stories. Even when someone gives me permission, I don’t. Each idea has to germinate inside me and take on an identity and life of its own. Once it does, it appears on the page. 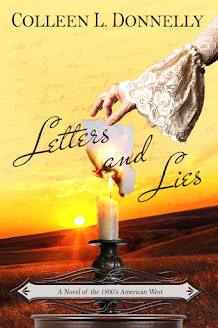 I needed to have some fun. So do people caught in any of the turmoil despoiling our world. My books before “Letters and Lies” were mainly serious, well received, but hitting the heart. I needed a fallible heroine with spunk who marched red-faced and determined through her own mistakes and others’. Louise Archer rose up to be that person, a near spinster in the 1870s who finds herself jilted, humiliated, and bent on fixing that. Justifying a single lie to enable her to get her man, she soon finds herself snowballed beneath too many lies to keep track of, in a strange town with a false identity, and no easy way out. I’ve written, rewritten, and edited “Letters and Lies” more than a person should be able to stand, and yet I still laugh at Louise each time I read her.

The same convictions I built for myself – maintain a thick skin, persevere, and forgive yourself for lousy first drafts.

What’s your next project? (or What are you working on now?”

I contracted “Letters and Lies” as a stand-alone title, then lo and behold, at the end of multiple rounds of edits, the man who jilted Louise jumped off the page. I already knew why he retracted his proposal, but in that moment I saw his heart. That heart needed to be told and I was supposed to do it. So I asked my publisher if I could do a “sequel” and they said yes, but asked the obvious—how could this man have any sort of happy ending, let alone a satisfying story? I scratched my head over that for days, batted him around with a theatre friend full of talent for plot and “setting the stage” until the light went on and I knew. Now his story is well underway and I’m looking forward to seeing this man in print soon.

Let's get a closer look at Letters and Lies:

Louise Archer boards a westbound train in St. Louis to find the Kansas homesteader who wooed and proposed to her by correspondence, then jilted her by telegram – Don't come, I can't marry you. Giving a false name to hide her humiliation, her lie backfires when a marshal interferes and offers her his seat.

Marshal Everett McCloud intends to verify the woman coming to marry his homesteading friend is suitable. At the St. Louis train station, his plan detours when he offers his seat to a captivating woman whose name thankfully isn't Louise Archer.

Everett's plans thwart hers, until he begins to resemble the man she came west to find, and she the woman meant to marry his friend.

“He wrote and changed your plans? Why didn’t you tell me? You know I love hearing his letters.”

Everyone loved hearing his letters. Or at least they’d pretended to. I glanced at my friends, especially the one who’d first suggested I correspond with her husband’s homesteading friend in Kansas who was ready to look for a wife. She dabbed at her eyes with a handkerchief while she flicked the fingers of her other hand in a weak wave. I dredged my soul in search of a smile. The man she’d introduced me to truly had penned everything I’d ever wanted in a husband, months of letters which convinced Mama Jim was my open door. Letters I’d foolishly carted from family to friend to blather every word like a desperate spinster. Drat.

“He didn’t send his change of plans in a letter, Mama. He sent them in a telegram.” Don’t come, I can’t marry you. The only words I never shared.

“Well I imagine your Jim has a surprise for you and didn’t have time to send a letter before you left for Crooked Creek. How thoughtful to wire you instead.”

Thoughtful…I felt poisoned and Mama would too if she ever found out Jim had shut my open door. Which she wouldn’t, since as soon as I got out there and found him, I’d wedge it back open again.

Thank you, Colleen, for being my guest today. Any comments or questions for Colleen?