That Down Home Feeling

One of the great things about doing a blog on writing has been getting to meet so many great authors as I interview them and learn more about their books and their writing careers. Everyone has such a unique story, whether they come from the big city, medium sized cities or small towns. Today's guest is Wendy Rich Stetson whose latest book takes us to a small town to introduce us to some fascinating characters.

What do you find are some of the challenges of being an author?

My day job is professional acting. I’ve been living in New York City for over 20 years, working as an actor, teaching artist, and audiobook narrator. To me, the publishing industry is down right civilized and welcoming in comparison to the entertainment biz! Though my road to publication was long, I felt supported and encouraged the entire way. I suppose saying "compared to being an actor in New York, being a writer is a dream” downplays the very real challenges of writing and all the hard work that goes into preparing a manuscript for release. But right now, on the verge of publishing my first book, that’s rather how I feel. I have nothing but respect and thanks for all the members of the writing community.

An episode of The Oprah Winfrey Show that aired in the early 2000’s first encouraged me to put pen to paper. I was living in a tiny studio apartment on the Upper West Side, lounging on the sofa that sat a mere six inches from my bed and a foot or so from the dining table and watching Oprah interview successful romance writers who found purpose and joy through weaving heartwarming tales of love. “I could do that,” I thought, every bit as naïve as I was to think a starring role on Broadway would come to me all wrapped up in shiny paper and tied with a satin bow. Still, I cracked open a brand-new notebook, and gave writing a try.
Hometown sat on my hard drive for decades as my acting career took off. I did indeed make my Broadway debut. I performed at theaters around the country and in New York City. I dipped a toe in commercial acting, film, and television. I narrated over twenty audiobooks and taught Shakespeare workshops to high school students all around the New York area. Then one day I thought…hey, what about that book I wrote about the girl and the Amish guy? I revised my story, cutting out VCRs and accounting for cell phones, and submitted it to lots of small romance publishers, hoping the story of a red-haired girl trying to find her place in the world, would, in fact, find its place in the world. Much to my delight, it did. Hometown is coming August 11, 2021, from The Wild Rose Press. 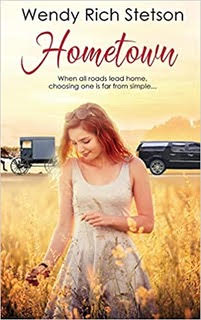 When Tessa's big-city plans take the A Train to disaster, she lands in her sleepy hometown, smack in the middle of the most unlikely love triangle ever to hit Pennsylvania's Amish Country.Hot-shot Dr. Richard Bruce is bound to Green Ridge by loyalty that runs deep. Deeper still is Jonas Rishel's tie to the land and his family's Amish community. Behind the wheel of a 1979 camper van, Tessa idles at a fork in the road. Will she cruise the superhighway to the future? Or take a slow trot to the past and a mysterious society she never dreamed she'd glimpse from the inside?
How do you come up with your characters?

Perhaps stemming from my work as an actor, I derive most of my characters from situations. Actors often use the phrase “what if” to connect to our roles and approach our acting work in a truthful, emotionally centered way. What if I was a young, headstrong woman in the time of the American Revolution, looking to find a husband among the hotheaded revolutionaries in New York City? What if my uncle killed my father and married my mother…how would I feel and behave? When I begin a book, I don’t think, “I know—I’ll write about a tall girl with curly red hair and impossibly high standards in men.” I think, “What if I moved back to my  hometown in central Pennsylvania and fell in love with an Amish guy?” I let the details spring from there.

I’m so excited to be working on the second book in the Hearts of the Ridge Series, Heartsong Hills. Jonas Rishel, the Amish carpenter who is the hero of Hometown, has a sister who in book one is angry and bitter after suffering great loss in her life. Book two places her in the spotlight, giving her a story full of music, whimsy, and unlikely love.

Good luck with your series, Wendy. I'll be looking for it. Thank you for being my guest today. Any questions of your own for Wendy?

Here is more information on how you can keep in touch with Wendy's work.