As authors, don't we usually gravitate toward writing stories in the genres that we absolutely love to read? That's true of today's guest in My Writing Corner, Chloe Holiday. She is a military physician who  says her favorite books are  steamy stories  about ordinary people who find themselves in extraordinary circumstances.  She enjoys reading about smart heroines and men who aren't jerks. 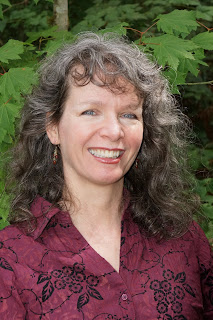 Chloe is a military physician-turned-novelist. She wants readers to feel the thrill of a smoldering gaze or the barest brush of fingertips, the shocked gasp at the underhanded villain, the angst of heartbreak, the joy of reunion, and of course, happily ever after!

She also says she enjoys delivering a sneak peek into intriguing scenarios, drawing from her background (military personnel, medicine, aviation) as well as other cultures. She says she finds it fun to live vicariously and go sailing, diving, or rock climbing. A bit of danger always gets her going, she tells us, so many of her romances have a suspense subplot, but she also loves humor and embarrassing situations!

Chloe tells us she hates to read the same old thing, with only the names and places changed, so her goal is to bring folks a fresh, fun, NEW story every time, with NO CLIFFHANGERS!

More than anything, she wants to craft a rollicking, great story readers can’t put down, one where love prevails in the end, one that will whisk people away from their own tribulations.

You can learn more about her at http://www.chloeholiday.com/!

I’m the sort who doesn’t want to wait by the phone, so I decided to self-publish and it’s been fantastic in terms of speed and making my own calls—I very much want each of my stories to be alive and vibrant and different. That said, I am excited to be joining The Wild Rose Press for an upcoming project. Being a hybrid author is the best of both worlds!

I love to write, and to “be the change I want to see in the world.” Who knew Gandhi was talking about Romance novels? It’s important to me to craft stories which open up new worlds for readers, whether that be the perspective of a Deaf heroine, or what it’s like to scuba dive, and to bring new knowledge in a fun, non-preachy way.

Visibility. One can write a wonderful story, but if no one sees it, it will languish.

Sometimes, the story demands it: Desire in Deutschland is for the Passports to Pleasure Series from The Wild Rose Press, so it required an American to travel somewhere for a romantic entanglement. For A Boy & his Dog, “boy” was required in the title, and it was perfect for a veteran bomb tech trying to reunite with his former K9 companion—whose current owner doesn’t want to let him go.

For others, it’s a “what if” moment that comes to me at all hours of the day and night. The ones that won’t let go make great stories. And I’m also afraid there’s a little masochism involved, too—at times, I find myself challenged to create a certain type of character, or to invert an old trope to be fresh.

Fly Boy is part of the All American Boy Series, which features stand-alone novellas (mine’s just a few words short of a novel) with each installment set in a small town. The series required that “boy” be part of the title and this seemed like a fun take on it. Plus, I love to bring my own experiences into my work for realism, and as a pilot, this was my chance!

Fly Boy is a steamy second chance, enemies-to-lovers story about a crop duster and a woman who wants to sell the plane he’s leasing, so that she can save the farm she inherited. 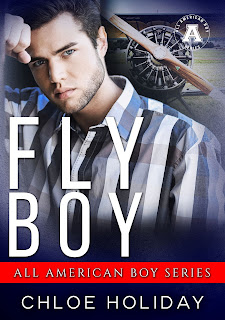 Travis burned her once, but now Tricia’s the one in power.

Flame him, or forgive and forget? Maybe he’s changed.

But … what if all the rumors are true?

Photographer Tricia Carlisle inherits her beloved grandmother’s orchard and leaves Chicago for her Texas roots, steeling herself to be immune to the charms of the small town—and those of Travis Walker, who stood her up on prom night seven years ago. Worse, she arrives only to find Nana’s place is in foreclosure. To have any hope of saving it, Tricia has no choice but to sell down assets—including her grandfather's crop duster.

Travis Walker loses his last true friend when Nana Carlisle passes. Will his handshake deal to buy her crop duster survive now that Tricia is taking over? She’s cash-strapped and probably still hates his guts. He needs that plane—it’s his ticket out of this small town that sees him as a crook—but it’s on Tricia’s radar now.

Fly Boy is a steamy, stand-alone second-chance novella in the All-American Boy Series. It's set in Deacon, Texas—home to sexy country boys and sassy, tough women. Warm, lazy afternoons in a hammock and swimming holes in a shady creek. Hot, heavenly Tex-Mex and even hotter kisses.

Come on down, y’all!

Now, let's get an excerpt:

Tricia poured a dollop of shampoo into her palm, thinking about today’s agenda.

She'd gone over and over the shoot itself in her head: lighting, angles, everything … Everything except thinking about a nearly-nude Travis, which was stupid. It’s not like he affected her in any way, not really. It was a business arrangement to him, and they’d done fine up to now. Friendly, if not back to true friends yet, but that might be possible in time. At the very least, it was fun to have him around to keep her from taking things too seriously. 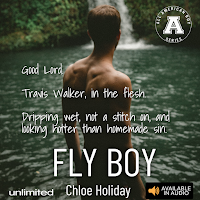 Tricia closed her eyes and lathered her hair, imagining photographing him. It would be fine. She’d just remain professional and get it done—it would only be ten minutes, tops. Besides, she’d seen him naked at the creek, front and back. If she could handle that surprise, she could surely manage a brief, scheduled session she’d prepared for. But the fluttering in her stomach said otherwise.

Tricia rinsed and swathed her wet hair in a towel. She dried off and wrapped another around herself, tucking the end in to stay in place, and hurried out of the steamed-up room. She’d taken to blow-drying her hair in her bedroom so as not to hog the only upstairs bath.

She froze at the oncoming sight of a shirtless Travis, his tee draped over one shoulder, head down as he fiddled with an iPod connected to earbuds. He padded forward, between Tricia and her bedroom door. He was … something—muscles upon muscles and a sprinkling of chest hair that merged into a dark line that disappeared down the front of his jeans.

Hot as a stolen tamale.

He lifted his head and stopped a few feet away. The corners of his mouth twitched. “Mornin’.” He drew in a slow breath, like a wolf testing the wind.

Her mouth dried. “Hi,” she managed, as if half her body weren’t on display.

Travis pulled out an earbud, his eyes never leaving hers, and stepped closer. “Well, now.” His teasing smile appeared. “Looks like lucky timing.”

Her breath caught and she lurched to the right to get around him instead of tasting the salt on his skin from his workout—just as he stepped to his left. They both hopped to the side again in an awkward dance.

Tricia halted, skittish as a colt, and flattened herself against the drywall, cool on her bare shoulder blades, to allow him to pass. It only made her more conscious of the way her breasts pressed together, half-exposed yet bound by the towel. 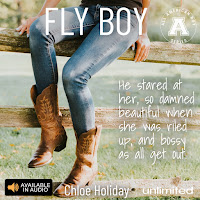 Instead of continuing down the hall, Travis pivoted to face her, nostrils flaring as if to catch her scent, and his gaze dropped to her lips. He reached to remove the other earbud. The tinny squawk of outlaw country music filled the space between them, but not enough to drown out the heartbeat pounding in her ears. The cord dangled from his fingers, and they twitched as his eyes slowly traveled down to the top of her towel.

Just a single tug would be all it took. Her nipples tingled and butterflies swirled in her stomach.

Lord have mercy. She was just standing there, almost like she was hoping … She shook her head, denying it. “I have to get dressed,” she whispered.

His eyes snapped up, and his hungry gaze morphed into a cocky smile. “Better go, then.”

Back in control, she hurried down the hallway toward her bedroom, clutching the towel to her chest.

She paused, afraid to turn around, and his mocking rumble reached her.

“Don’t start anything you don’t want me to finish.”

What’s your next project or what are you working on now?

I’m finishing final revisions on No Easy Match, an enemies-to-lovers medical/billionaire romance about a transplant surgeon and the enigmatic CEO who hires her to set up a program for him in The Bahamas. As a military physician-turned-novelist, I enjoy bringing realistic military and medical themes to my stories. It’ll come out in late summer.

Thank you, Chloe, for being my guest today! Here are the buy links for Chloe's books and how to read more about her.

https://tinyurl.com/ycy7nzre (this is a shortened UBL)

Does anyone have any questions or comments for Chloe?