On the Road to Romance

Stories about authors and how they became published can be as fun and rewarding as reading their books at times. I always love to find out how authors discovered they wanted to be writers and then how the journey toward publication began for them. Today in My Writing Corner, I asked author Erin Bevan for her story.

Erin, when did you realize you wanted to be a writer?

I toyed with the idea, loosely, when I was about 23 or 24. Just kind of a what if thing, nothing serious. I had a job, a new husband, we were trying to have our first child. It was just a “wouldn’t it be cool if I could do this in life” kind of thought.

Then., fast forward about two years and I was alone in an apartment in South Korea while my husband was at work and my daughter was in a Korean day school program. I thought “this is my time”, so I signed up for an on-line writing class through the London School of Journalism and I gave it a shot. Writing became an outlet for me to not feel so lonely, and then it got kind of addictive, and so here, I am back in the United States and still writing. I guess you can say, I like it!

Please tell us about how you got published.

Well, as I started writing for pleasure, and to keep my mind busy when I was in Korea, I figured I might as well try to publish something. Little did I know how hard that actually was. After two or three years (my memory fails me) of dabbling in writing, I had pursued the publishing route and received lots of no’s. So many no’s actually! In December of 2013, I’d been waiting to hear back from one editor about a short story I had submitted. I had told myself if this editor came back and said “no” I was quitting. Everyone thought I was a joke anyway. At least that’s how I felt. When I told people I had started writing, they would look at me kind of like I was a desperate housewife. I was, but still, they could have at least acted like they believed me.

Well, one December afternoon, I opened my inbox to receive a long email. The first two paragraphs told me how bad I was. My finger hovered over the delete button. I didn’t need my EMAIL to tell me I sucked! So many people already had. But, for some reason I kept reading, and I saw a huge BUT. I continued reading only to see that a contract was attached. Despite the fact I sucked and had a long way to go, the editor wanted my story, and me! And that’s how I got published. My finger hovering over the delete button, milliseconds away from throwing my writing career away.

Where did you get the idea for your newest book, Tank? 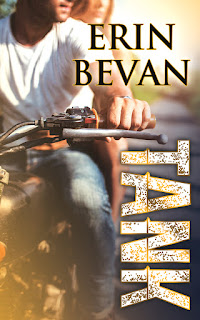 , A ladies’ night out and a few margaritas down the hole, someone started talking about bikers. I really can’t remember all the details, but then the group BACA-Biker’s Against Child Abuse was brought up, and my friends explained to me what this group did. A bunch of leather clad dudes that stood like vigilantes outside of abused children’s homes helping them feel safe. Right then, I knew that was a story.

What do you like best about your characters in this book?
I like a secondary character, Father, probably the most. I envisioned my husband’s uncle when I created the character, and I tried to incorporate a little of his humor. Overall, I feel like he came off the page pretty well, and I’m proud of how I’ve portrayed him.

Do you always know how your story is going to end?
Umm… yes-ish. I think. I don’t know the full story when I sit to write it. I see scenes, hear the way the characters would speak to each other… all the details, those come over rewrite after rewrite, but usually I have an idea of how the ending will go.

Tyler Wilde moves to Black Widow, Texas, to join the Blue Guardians, a local biker club that helps abused women and children. He's intent on starting his life over, but a small piece of his past collides with his present when he runs into the local waitress, Annie Carter.

Annie's the girl of his boyhood dreams, and Tyler can't wait to get reacquainted with her. Only problem is, Annie's engaged. But what has Tyler more troubled than the diamond on her finger is the bruise that graces her arm. To make matters worse, Annie's abuser and intended husband is also the town's Chief of Police.

Tyler is determined to offer Annie a safe haven, but she refuses his help until her life is hanging by a thread...

That certainly catches my attention! What would you tell writers who are just starting out that you wish you had known?
Believe in yourself and your stories. If you like it, chances are someone else will, too.

How can readers reach you or find you online?
www.erinbevan.com
www.facebook.com/erinbevanwrites/

Thanks, Erin for being my guest and sharing your story and your new book.  Any questions or comments for Erin?
- May 24, 2017