Hot Mystery for A Cold Day

We're in the heart of winter here in Colorado and it's the time when you want to curl up with a good book to spend the day because there's are foot of snow outside and the streets on our block are barely passable. What better way to do that than with a wonderful mystery! Today's guest in My Writing Corner, is J. L. Delozier who has a new mystery out that sounds like a just the sort of  book to enjoy on the snowy day. 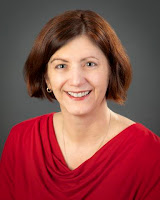 Jennifer says she sent made her first story submission written in pencil on lined  notebook paper. Let's find out more about her.

Tell us about how you got started.

I wrote short stories in junior high school and took a creative writing class as an undergraduate. After that "write a novel" hovered at number one on my bucket list. When I finally decided to take the plunge, I prepped by reading Stephen King's On Writing and then just went for it.

What do you hope readers get from your books?

Escapism, pure and simple. As a physician, I see enough bad things in everyday life to ever want to write nonfiction.

How do you write your stories?

I'm a punster, so the characters develop themselves as the story flows. That sounds touchy-feely, but it's truly how I write.

Where do you get ideas? 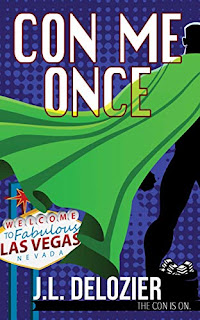 Often from snippets of overhead conversation, whether that be in person or via the radio or television. For Con Me Once, the idea came from an old GQ article on the "real-life superhero community", specifically a man named Phoenix Jones. The article made me ponder the psychology behind the need for these (mostly) men to dress up in home-made costumes and patrol their neighborhoods. It also made me wonder what would happen if they go embroiled in some heavy shit, and voila! Con Me Once was born.

As a former Las Vegas resident, the location of the book grabbed my attention. Let's hear more about Con Me Once:

When Frak Lambda, a bumbling superhero wannabe, witnesses a mob hit gone wrong, he ends up running for his life.  Enter the mysterious Keira, whose secret academy claims to turn wannabes like Frank into real heroes. Frank knows a con when he sees one. But desperate for an escape, he joins three other recruits for training in Las Vegas. Against the backdrop of a thousand spandex-clad cosplayers, Keira's true agenda--a multimillion-dollar heist from her mobster brother--is exposed. With their lives and a fortune at stake, Frank and his team of misfits fight to become the heroes they always wanted to be.

Tell us about your next book What are you working on now?.

My WIP, working title The Photo Thief, is my first mystery with a significant paranormal element and also my first to mix POV characters: one 1st person, and one 3rd person. It’s been a challenge, to say the least, but hopefully it’ll be worth it. The plot centers around a young adult with a seizure disorder who “hears” old photographs collected by her great-grandfather speaking to her. They ask her to solve their murders—and that of her own mother.

Thanks for introducing us to your books and your writing.
Here's the buy link: