A Story for Today

As we make the turn from winter to spring, it's a good time to look at new writing projects to work on as well as to search for some new authors to read and follow.  I am always looking around for new authors to enjoy in My Writing Corner.  My guest today is Bob Richard who writes for the Wild Rose Press as RW Richard. He has a BS in Physics and an MBA in management/marketing from St. Joseph’s university and was a champion swimmer as well as  a chess master with State titles (CA NJ NY).  So far he has written nine books and has won best contemporary romance of the year as well as other awards.

Welcome, Bob, what do you see as some of the challenges of being a writer?

Being your own boss means you have to tell yourself to stop slacking, lol. And I don’t always listen.

In 2008, and inspired by my wolf/dog, I wrote an unusual novel about wolves and men 100,000 years ago. Got an agent but she couldn’t sell it so I self-published. Since then I have tried to engage agents or publishers but in the end had to self-publish. My novels have won awards for best romance. Now, finally, The Wild Rose Press, has picked me up.

I don’t know. It just hits me as right. Once I chose the name for a young lady, Autumn Breeze. It became the title and I found it an easy association with the events surrounding 9/11.

Like my story about wolves and men, I realize that most people didn’t know something, that is, wolves had a symbiotic relationship with men thousands of years before men attempted domestication. I had to tell the story. Regarding 9/11, I read the CIA reports about a team of terrorists spotted in Vegas in August 2001. I put two and two together and had to write the story. That’s the way it goes for me. For some stories, if I don’t have that spark, I abandon them. 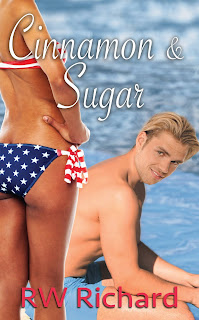 Tell us about your latest book, Cinnamon and Sugar. What made you write it?

I remembered the odd event early in the Trump presidency when approx. 14 protesters showed up outside the White House. The counter-protestors numbered around 4000. I had to write a story with that as a baseline.

When I was caretaking my daughter, I read to her from my draft manuscript that I have since dedicated to her. I read to keep her mind off her pain and that she might have to leave soon. I never imagined her reaction. She cried, yes, of course, it’s a tear jerker, but it was more than that. It was how she loved, lived, and taught. She, being who she was, instructed a professional writer (me), on changes she wanted (demanded). Since it was on a subject (racial hatred and brother and sisterhood) that caused her to march just like her old man did with Dr. Martin Luther King, Jr., she made me promise I get a “real” publisher and, “Dad can you help my boys?” I said, “yes, honey, all the royalties will go to them.” So, Lani became my third muse and 1st angel. The story is rated PG.

Tell us about the cover.

When I write I search for a model who is what I think my hero and heroine look like. I try to capture them in the process of struggle, since the arcs of the story and scenes are so important. In this novel, Cinnamon & Sugar, published by The Wild Rose Press, the two models attached are exactly how I pictured them. In the story, Alicia, is compared favorably to any number of young starlets. Humphrey when first seen melts Alicia’s resistance, but she’ll struggle on.

If you don’t have a burning desire to write something that either bothers or intrigues you, don’t write it. When you do write, open your heart to criticism it will help you grow fast and study books on writing because they’re based on what agents and publishers want (plus the grammar).

Being a chess master, I intend to write a chess romance. I have to tell this story.

Let's get a blurb on Cinnamon & Sugar:

Humphrey Bertrand's genius-level IQ can't help him find his moral compass. His family is filled with racial conflicts and he struggles to find his own way. But he cannot let anyone drown, regardless of their skin color. Alicia Bloom, a gifted valedictorian and poet runs away from an abusive situation. While she is thankful to Humphrey for saving her life, she doesn't want to be tied to anyone. When an attempt on her life forces them to hit the road together to stay one step ahead of a murderous maniac they wonder if their dreams of a future will be put on hold permanently.

How can people buy your book or contact you?

Thank you, Bob, for being my guest.  Any questions or comments for Bob?