A New Year of Intrigue & Romance


Welcome to the new year! 2019 promises to be another year of great reading and discovering some wonderful new authors as well as enjoying the latest works of some of our favorite writers. We're starting out the year in fine fashion, spotlighting an international thriller that mixes intrigue with romance:  For the Love of A Spy by M. S. Spencer.

Although she has traveled in five continents, M.S. tells us that she has spent the last thirty years in Washington, D.C. as a librarian, Congressional assistant, speechwriter, and non-profit director. She has two grown children and a perfect granddaughter. 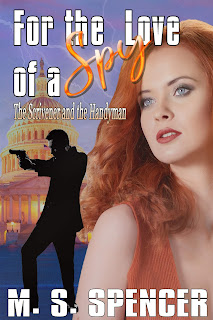 In an era electric with possibility and peril Maris Graystone and Michael Kinder meet under oddly conventional circumstances. Despite the instantaneous sparks, they both sense there is more between them than physical attraction.

Their love affair intensifies against the backdrop f the dramatic world events of 1991 -- a disintegrating USSR, Middle East peace talks and Vietnam's re-emergence on the world stage. Michael appears and disappears at unpredictable moments, leaving Maris limp and lovelorn. n her quest for answers, she is yanked into the dangerous world of Michael’s work—in Washington, DC, in France, and in Spain. Looking for safe harbor for her emotions and her body, she accepts the advances of a dashing French diplomat.

Will she embrace the luxury and comfort of Emile and his chateau or the romance of international intrigue with Michael?

Something is wrong. He cares about me, of that I’m sure. So what is it?
In the beginning, a lifetime ago and before they surrendered to their desire, he had said something about it being neither the time nor the place. What did he mean? She didn’t want to know just yet, but she would ask him. Yes, when he wakes up.
Over his shoulder, she glimpsed the clock—five p.m. We’ve been in bed for four hours! She sat bolt upright. He hadn’t fixed her air conditioner. He hadn’t called his office. She hadn’t finished her column. What on earth were they thinking? Or on what other planet? Did we beam up to Mars, where this sort of behavior is acceptable?
She shook him. “It’s late. You have to go.”
He came instantly awake. His azure eyes fastened on hers; his arms went automatically around her.
She felt herself slipping into their world but fought it. “You have to go!”
He kissed her tenderly. “I know. I have to…pack. I have to go.”
“When?”
“I’m leaving Thursday. I told you.”
“No, you didn’t.” Maris wanted to be indignant, but in the back of her mind, a little voice nagged that he was right. “But—where are you going?”
He opened his mouth and closed it. He peered at her, his eyes questioning. Finally, he said flatly, “To Zagreb.”
“Zagreb? As in, Yugoslavia? Why?”
“It’s not important.” His serious tone told her that it was indeed important, but it also stopped her from asking any more questions. She watched while he dressed quickly. As he fastened the few remaining buttons on his shirt, he bent over her to kiss her nose. “I’ll be gone a while.”
She caught his hand. “I need to know one thing before you go.”
He smiled tenderly. “Yes, I am.”
She blinked in confusion. “Are what?”
He seemed perplexed. “Why, crazy for you, of course. Don’t ask how this happened either since I don’t have a clue.”
“But, but…” She had to ask, even if it made her look ridiculous. “What I want to know is, what’s your name?”


At that, he threw back his head and roared. All the worry coloring his features just moments before fled. He sat down on the bed and touched her cheek. “I suppose that could come in handy, in case you want to send me a Christmas card or something.” At her look of apprehension, he replied quickly, “Michael. It’s Michael.”

If you would  like to get in touch with M. S. or learn more about her, here is her social media information and contact info:

My calendar of events can be found here:
Romance Books 4 Us: http://www.romancebooks4us.com/M.S._Spencer.html

Thank you, M. S.. for introducing us to your latest book and two wonderful characters!