With Spring in the air and Summer just around the corner, it's the time of the year when readers start choosing their great summer reads or the books they are going to pack in their vacation luggage.

Today's guest in My Writing Corner, Beth Henderson, has a new book that sounds like great summer reading. 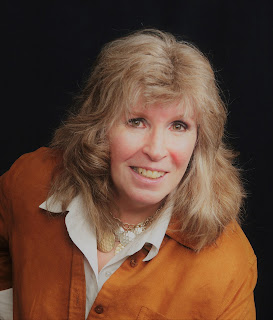 Beth has been a published author in romance since the year 1990 when her first romantic suspense/comedy was published. Since then she has been a busy writer. She's had a long list of titles released through various publishing houses and under a variety of names. In 2021 she launched a 4-volume paranormal lite cozy mystery romantic comedy series, the Whichur-Wolfe Detection novels, all of which swept up 5* reviews.

As my first book was published back in the Jurassic Era (1990) before there was Amazon or the Internet or eBooks or the Internet, I’m not sure how far back to go! It took 12 years of rewriting and resubmitting my first three books before the first one was picked up. But there were many tumbles from the published pedestal after that, like when Clinical Depression hit and I couldn’t think my way out of a paper bag, or the years when I moved back in with my parents to be their 24/7 caregiver. I started to clamber back on the pedestal in 2019 when an urban fantasy series was picked up, then in 2020 Wild Rose Press snagged a historical romantic western mystery (released in 2021) and then the current book, GHOST NOTES, a contemporary romantic suspense released this month. Still lots of stories to tell, thank goodness! But I decided I wanted to be a published novelist when I was 12 and at least I hit the goal…more than once considering I’m closing on 40 novels written now!

Well, obviously, it’s a great ego booster to have readers fawn on you and gush about the characters. But I think losing myself in my own story words is the most fun I’ve ever had. I get to be all these people! I get to hang out with the heroes, guys I’m far more attached to than any I ever dated or married. Actually, I tend to call each of the stories by the hero’s name rather than the title. Oddly enough, I’ve met a few other writers who confess to doing the same thing.

How do you develop characters?

The characters just walk onto my stage and do their own thing. I have had to argue with at least one guy who wanted to be the hero when I’d cast him as the hero’s best friend, but once I promised him his own book, he was copacetic with the idea. I’m a total pantser, never knowing quite what will happen though do know how it has to end…and that’s with the hero strolling into the sunset with the heroine (figuratively) after the two of them have wrapped up the mystery.

Tell us more about your latest book and how you came up with the idea to write it?

GHOST NOTES started materializing the first time I heard Jason Gould’s recording of Misty. Only my hero now performs it in my head, naturally. I love music themes, but I also love mystery. Once Pel Flannery told me how he’d nearly died a decade ago and that the guy who tried to kill him was still out there…well, there was no turning back after that. The story flowed as smoothly as Pel’s fingers glide over the keys of his grand piano.

How about a blurb: 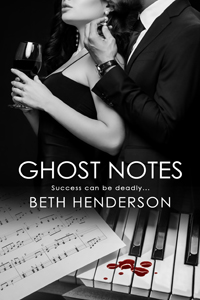 Jace Hastings, rising music star, is presumed dead in a vehicle collision, courtesy of a stalker with deadly designs. Ten years later, P.I. Gaelen Wyndom can’t believe someone wants her to find him.

Pelham Flannery rejoined the world from ICU, fully aware someone had tried to kill him. To live, he went under the radar, distanced himself from music, and disguised everything that would give away his identity as Jace. After a decade, is it safe to come out of hiding?

Gaelen, delighted to be trained as a professional investigator by her new husband, continued in her new career after he was killed. Assigned to locate Jace Hastings, she isn’t told who wants to find him, but she puzzles it out. If she’s right, it’s the man who tried to kill him before. Which means she needs to find Jace Hastings and save him.

Now, let's get an excerpt:

When a percussive knock sounded on his open office door, he glanced up. The once soggy guest hovered there, his shirt swamping her upper body, though she’d tied it at her waist. She lifted the carryout bag.

“Just wanted to thank you again,” she said.

He wondered what her rendition of “Georgia On My Mind” would sound like. There was simply something in her voice that hinted at the ability to sing. Yet he doubted that was why she had come to the restaurant that day.

“Listen,” she said. “While this sounds like a really bad pick-up line, and that’s not my intention in the least…”

She grinned at the lie.

“It’s the least I can do to show my appreciation over the loan of your spare shirt.”

She tilted her head to the side. The sweep of chestnut hair swung with the motion. “Have we ever met before? There’s something familiar about you, but I can’t put my finger on it.”

Warning bells clamored in his mind.

“Maybe I’ve got that kind of face,” Pel said and hastily attempted to undermine any lingering suspicion she might have. “You know, overburdened with mediocrity. Are you here auditioning for the vocalist job?”

Her smile was back. “Then that’s probably where the sense of déjà vu comes from. You probably have features in common with her.”

“Sorry to have disturbed you, Mr. Pelham.”

“Sadly, yes, though Pel will suffice,” he allowed, then surprised himself by leaving his chair again and heading around the desk. “What were you drinking before the collision?”

“Coffee,” she said. “I’m probably wearing some of it, too. I sorta fell against the table when the drenching occurred.”

As dangerous as it might be, Pel found he wanted to stay within the range of her smile a bit longer. “Not a water-resistant model?”

“Not much water to avoid in Phoenix, so I skipped that feature.”

“Come with me,” he said, joining her in the hall and pausing only to close the office door.

What’s your next project or what are you working on now?

I’ve got two urban fantasy manuscripts due by the end of the year, but the next romance project will be back to another historical romantic mystery set in 1852 in California Gold Rush country. My bachelor’s degree is in American History and, although I’m an Ohio gal, I spent 22 years living between Las Vegas, Nevada and Tucson, Arizona, following where husbands’ jobs took us. I love the old west, particularly the mining camps. Yes, I married twice and did a lot of personal romance research between the two of them! This next romance has been on a back burner for years. I think it’s time to let the hero take the reins…or attempt to wrestle them from the heroine.

Be patient. Continue to develop your craft. I’m a far better writer and spinner of tales today than I was when my first books were published in the early 1990s. But as that was still the era when no one in their right mind self-published (because that was vanity publishing), patience was what it took to work through the submission process, wait for a reply (I waited 18 months on one manuscript because the editor apologized so nicely for the delay…but she did send me a contract on it finally!). The agents and editors get floods of new manuscripts every day and it takes time to wade through them. If your prose or storyline don’t match what they are looking for, there is always someone/someplace else to submit manuscripts to. And, should any rejection (though they call them “passes” these days) actually include a suggestion to improve an element, or the magic words “if you rewrite this, I’d like to see it again”, take the suggestion to heart and do the rewrite. I followed one editor who did this through three publishing houses (she moved to a different one every few years) before she gave me the longed-for contract, although it was for an entirely different book. Still, her suggestions landed that original manuscript a contract elsewhere around the same time. It’s tough to wait, but patience is a virtue that in publishing can pay off.

You are so right! How can readers buy your books or get in touch with you?

Thank you for being my guest today.  Any questions or comments for Beth?