Bridging the Gap through Romance 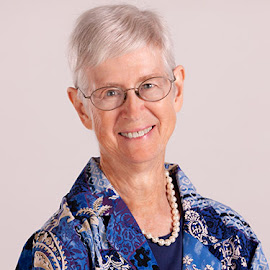 There are some places you live that you never forget. San Diego is one of my favorite all time locations where I've lived and I'm pleased today to host a writer who has had the privilege of living there all her life. My guest today is Linda Griffin. She tells us that as soon as she learned to read, she knew she wanted to be a “book maker” and wrote her first story at the age of six. She retired as fiction librarian for the San Diego Public Library to spend more time on her writing and has had stories published in numerous journals. Her latest book, Bridges, is her fifth novel from the Wild Rose Press. It’s a departure from her romantic suspense titles, a slow-burning sweet romance with a more formal tone.

In 1963, Neil Vincent, a middle-aged World War II veteran and “Christian atheist” is working as a chauffeur at Westfield Court. He spends most of his spare time reading. Mary Claire DeWinter is a young, blind, Catholic college student and reluctant heiress. To secure her inheritance, she has to marry within a year, and her aunt is pressuring her to marry a rich man who teased and bullied her when she was a child. Neil and Mary Claire shouldn’t even be friends, but the gulf between them is bridged by a shared love of books. Can they cross the bridge to more?

Sounds like a good book. Let's hear from the main characters, starting with Neil: 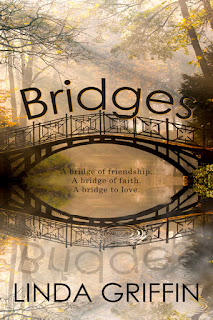 Tell us a little about your past, Neil.

My father died when I was young. My mother was a Quaker and strongly pacifist, so it was tough for her to see me join the army at eighteen. I thought I was a man and had a patriotic duty to fight. After the war, I just stayed in that life, but I grew tired of being rootless and restless. I took the job at Westfield Court because it offered a more peaceful existence, with plenty of time to read.

Why do you enjoy reading so much?

Reading is a means of escape, into other lives and into the world of ideas. Books have enriched my life in a way nothing else could. I think everyone has a thirst for knowledge, and I’ve always satisfied mine with the printed word.

What are you looking for in a woman?

I don’t think I’m looking for a woman at all. I didn’t have much opportunity to meet the kind of woman I would want to marry in my former life. Jane was already working here as a maid when I arrived, and we fell into a comfortable, casual relationship with no expectations. What I like about her is that she’s honest and straightforward, with no pretensions or unnecessary drama. I admit to being a little leery of commitment.

What attracts you to Mary Claire?

First and foremost, her bright, engaging mind, and then her kindness, her courage, her simple faith, and the positive outlook that earned her the nickname Sunny among her college friends. I think she should go back to school, but I’ll miss her if she does.

What frightens you about her?

She is so young, and vulnerable in so many ways. She faces a future she didn’t choose. I want to help her, but I don’t know how, and I don’t understand my own feelings toward her. How did we become friends so quickly, in spite of our differences? And why do I find it so hard to refuse her anything?

Why is your aunt pressuring you to marry?

My grandfather’s will specifies that I have to let her live at Westfield Court for the rest of her life, but if I don’t marry, I won’t inherit, and the estate will go to the state of Massachusetts. She would have to find another place to live, and she doesn’t have much money of her own. In her place, I suppose I would feel the same way. She wants to choose my husband herself, to make sure he’s worthy of our family, I suppose.

What bothers you about the man your aunt wants you to marry?

I don’t want to marry someone who only wants the money I’ll inherit, and especially not Drake Whitman. When I was a child, he thought it was funny to tease and bully me, to trip me and tell me I was ugly. Neil said he must have grown up since then, but I don’t think so. He’s still stupid. He doesn’t read. I would never be able to talk to him about books, or anything really, and I certainly don’t want to go to bed with him…And he’s not Neil.

What draws you to Neil?

I liked his voice first. He was a bit stiff and formal with me in the beginning, but I could hear that he was kind and intelligent. He’s the smartest person at Westfield Court, and he loves to read as much as I do. He gives me good advice, and he makes me laugh. Unlike my Aunt Edna, he talks to me as if I were an intelligent adult, an equal, even though he has a lot more knowledge and experience than I do. And he’s always on my side.

What do you want for your future?

Before my grandfather’s will changed everything, I wanted to finish college and become a teacher. I didn’t expect to marry or have children, even though I like babies. Now I have to marry if I want to inherit. If I don’t, I can’t help my family financially, Neil and Jane and the other servants will lose their jobs, the horses will be sold, and Aunt Edna will be homeless. But I don’t want to spend the rest of my life here with her trying to run my life either, not to mention living with a husband like Drake Whitman. I guess what I want is for everything to be simpler.

When the train rumbled in, he got out of the car. He stood patiently on the platform as the passengers disembarked, holding up a small slate on which he had chalked DEWINTER in large capitals. There weren’t many passengers, but they were briefly delayed while the conductor helped a blind woman navigate the steps. Neil’s gaze fell expectantly on a woman in her thirties, with an awful hat, but she was immediately met by a portly man and a teenage boy. No other likely prospects appeared, and he waited for someone to respond to the sign. No one did.

Finally, only two passengers were left on the platform—a small, homely man and the blind woman. Blind girl, really. She couldn’t be more than twenty. She had a jointed white cane, and her large sunglasses didn’t cover the edges of the scars on her face. She would not have been beautiful even without the scars—too thin, for starters, of average height but with small bones. On the other hand, her face might once have been pretty, and her hair was clean and shining, raven black, and well brushed. She was too pale, and the scars around her eyes were red and ugly. She looked a little lost.

Feeling foolish, he lowered the slate. “Miss DeWinter?” he asked as he approached her.

“Yes,” she said, turning toward his voice with a smile.

Doesn't that sound intriguing?  You'll have to buy the book to read the story! So here are Linda's buy links and her social contacts.
Buy links:
https://shop.aer.io/TheWildRosePress/p/Bridges/9781509241811-11180?ni=true

Instagram: https://www.instagram.com/lindagriffinauthor
Thank you, Linda, for being my guest today.  Are there any questions or comments?
- May 03, 2022