A Promise from the Past

It's that time of the year when we start looking for just the perfect book to take on vacation or for those lazy days sitting out by the pool or beach. Today's guest in My Writing Corner has a book that was just released that sounds perfect for afternoon summer reading. Her newest book is Prophecies and Promises. 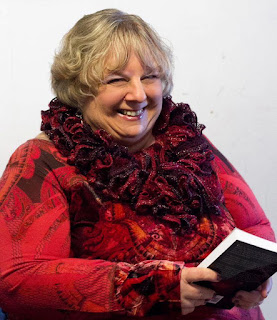 Alana Lorens has been a published writer for more than forty years. Currently a resident of Asheville, North Carolina, she describes herself as an aging hippie who loves her time in the smoky blue mountains. One of her novellas, That Girl's the One I Love, is set in the city of Asheville during the old Bele Chere festival. She lives with her daughter on the autism spectrum, who is the youngest of her seven children, and she is ruled by three crotchety old cats, and six kittens of various ages.

Her latest book is Prophecies and Promises.  Let's get a blurb:

Tamsyn McKiernan thinks her dreams have come true. She’s engaged to a dashing Key West bachelor and finally in her widowed father’s good graces. But in her heart, she knows something’s wrong. She loves the ocean and the quiet pleasures of nature—so what does the aristocratic life she’ll lead truly hold for her?

Mercenary captain Drake Ashton is neck deep in preparations for the Spanish-American War, running guns and other supplies to Cuban natives who want out from under their Spanish masters. He and his brother Freddie risk their lives daily, focused on saving his friends on the island. Nothing else matters but his mission.

A chance encounter with a spiny sea urchin brings the two together, and neither of their lives will ever be the same again. 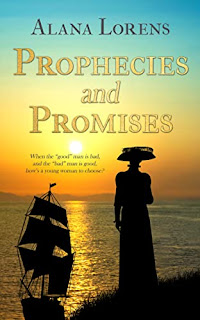 Let's hear directly from the characters:

Tamsyn, what do you want most in life?

What every other young woman wants, I suppose—to be happy and have a secure future. Getting married to Thatcher Winslow should accomplish this.

What do you hope for in your future?

I want to be able to choose my own path when I marry—but sometimes I worry because it seems like the society wives are a closed community and I’ll never be like them.

What draws you to Captain Drake Ashton?

He doesn’t try to control me. He’s funny and warm and he knows so many things! He wants to share them with me so I can make my own choices. We like natural things, and share a great many interests.

What frightens you most about him?

Well, he’s a…pirate, right? His life is dangerous. He carries guns with him to give to the rebels. The Spanish fleet wants to kill him—I’m scared for him…and a little bit of him as well.

Tell us about your current life and why it appeals to you.

I’ve grown up on the water. My brother Freddie has been my charge since our parents died, so we’ve wandered a lot. We found the group of rebels in Cuba, families, men, women and children who want to be rid of the Spanish. We’ve taken it as our own cause.

What do you want for the future?

I can’t think about the future beyond the war. We’ll be lucky to survive that long.

What is it about Tamsyn that draws or intrigues you?

She’s so interested in the world. Most of those young society ladies hardly have a brain, but she’s brilliant. From outside I can see she’s being drawn into a trap, and I want to help her so badly. She is firmly lodged in a piece of my heart.

What worries you about Tamsyn and becoming involved with her?

I mean, what kind of future could I offer her even if she would consider me? I’m living day to day on the sea, facing death regularly, not safe at a plushy home like some rich islander like Winslow. As much as I want to ask her to choose me, I know it’s not the “correct” choice as society would see it.

Want more?  Let's get an excerpt:

The wine would go straight to her head soon, she knew from previous, infrequent consumption, so she must sip it slowly. One of them had to keep their wits.

She felt the curious eyes of the crew, some shy, others bolder in their observation. Tamsyn smiled at them all. One broad, bullish man came forward with a blanket, which he spread on the deck. Drake clapped the man on the shoulder.

“Good thinking, Chaney. A picnic it will be!” He gestured to Tamsyn that she should seat herself, which she did without hesitation.

Within a few minutes, trays of food came up from below decks, chicken spit broiled with crispy skins, fruits and cheeses, Bahamian bread with a thick slab of butter. The men vied for the opportunity to serve her until Drake finally dismissed them with a laugh.

“Cook has enough for all below. Go take your supper. We may have some business awaiting us yet tonight.”

The men cheered and noisily went down to eat. The skinny cabin boy remained to serve his captain. Drake saw that the boy got a plate of food, then sent him away. “A few moments alone,” he whispered conspiratorially.

Drake held up a finger, silencing her. “Not a word of that now.”

Tamsyn started to argue, then realized he would just cut her off again. It was right. What might happen in a minute, in an hour, would not be changed if she took the time to immerse herself in the joy and comfort of this time with Drake.

The food smelled so good in the fresh night air, and Drake urged her to taste everything, from sweet melons to spicy chicken. It was simple fare, but it satisfied her more than any of the expensive delicacies that had been served at the Pickhams’ buffet. Surely it is the company which has improved my appetite. Drake’s dark eyes danced in the moonlight, and he often turned to her with a smile, perhaps wanting to say something but reluctant to break the spell they seemed to be under.

But not yet, Mamma, not yet…Can you see me, Mamma? Tamsyn wondered silently. Can you see how happy I am?

Want more?  Here is a book Trailer followed by the buy links:

And if you would like to get in touch with Alana directly, here are her Social Contacts:

Thank you, Alana, for being my guest today. Any questions or comments?